This article is using {{Card template}}.
See Help:Style guide/Card for how to edit this kind of article.
Edit this article
Warhorse Trainer
2515 • AT_075
Regular 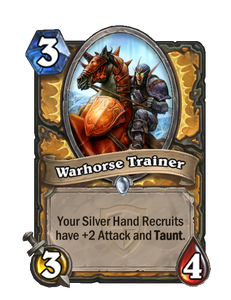 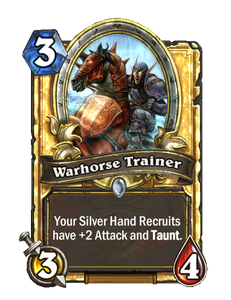 He doesn't even get Sundays off. Every day he's hostling. 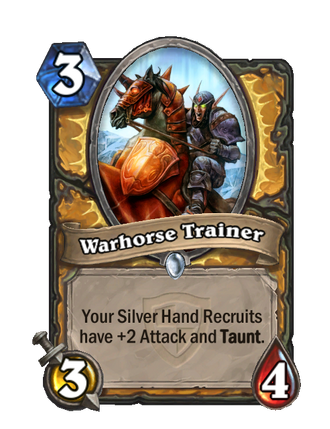 Warhorse Trainer is a common paladin minion card, from the Grand Tournament set.

Quartermaster, Warhorse Trainer is used to power-up your Silver Hand Recruits, allowing them to trade more favourably or deal more damage to the opponent's hero. Unlike Quartermaster, this card's effect is not a Battlecry and is instead a constant effect, which can be both a blessing and a curse. On the upside, Warhorse Trainer will buff any future recruits you summon. On the downside, his effect is lost once he's dead. Because of this, it's usually a good idea to play Warhorse Trainer while you already have a few recruits ready to attack, guaranteeing a benefit before your opponent removes him.

He combos very well with cards that generate additional Silver Hand Recruits, such as

Muster for Battle and

Warhorses are the basic version of Chargers. Based on the card's name and effect, it would seem that this blood elf is training Silver Hand Recruits how to summon warhorses.