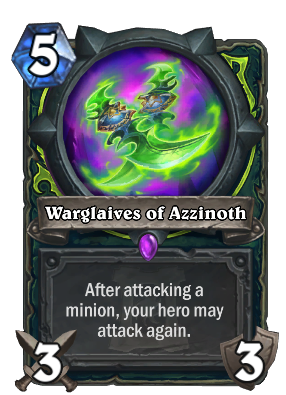 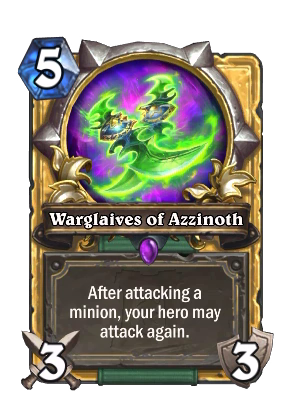 After attacking a minion, your hero may attack again.
Flavor text

For the tutorial cards, see Warglaive of Azzinoth and Dual Warglaives.

Warglaives of Azzinoth is an epic demon hunter weapon card, from the Ashes of Outland set. 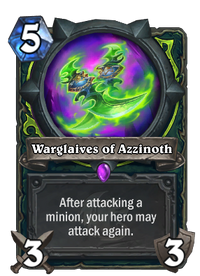 Two copies of regular Warglaives of Azzinoth (Core) are obtained for raising demon hunter to level 9.

Two copies of golden Warglaives of Azzinoth (Core) are obtained for winning 250 games as demon hunter.

Warglaives of Azzinoth (Core) is uncraftable and cannot be crafted or disenchanted.

Warglaives of Azzinoth can be used to attack through Taunt minions or clear wide boards. The statline is generally good thanks to Demon Hunter's variety of attack buffs. Warglaives of Azzinoth can extend the effects of attack-boosts like Chaos Strike or Inner Demon to up to three targets, so long as two of them were minions. Cards that buff Durability like Captain Greenskin can extend the usefulness of the weapon even further.

The Twin Blades of Azzinoth are a pair of weapons wielded by Illidan Stormrage. Azzinoth was a doom guard commander whom Illidan slew 10,000 years ago. Illidan took Azzinoth's twin warglaives and trained himself to use them. He has become exceedingly efficient with the weapons. When Illidan used the twin warglaives they were usually connected, but could be disconnected to form separate weapons. Once disconnected they could be reconnected to form a single weapon once more. The pit lord Magtheridon proved to be no match for the wielder of the Twin Blades of Azzinoth.