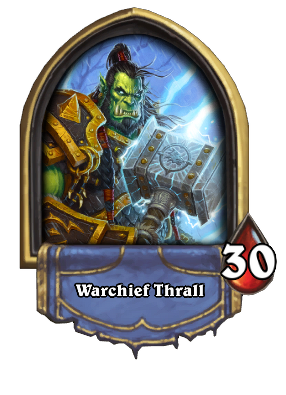 Warchief Thrall is an alternate hero for the

Shaman class. It is obtained by winning 1,000 Ranked, Arena, or Duels games as shaman.

This portrait depicts Thrall as he appeared from Warcraft III until Cataclysm.

All members of the Horde have to swear a blood oath to join the Horde and are thus obligated to follow the warchief's commands and support the warchief in times of war if the warchief calls upon them for aid.

The position of warchief can be attained by having the previous warchief chose a successor or challenging the current warchief to a Mak'gora: a prearranged duel with deadly weapons between two people following a formal procedure in the presence of witnesses and traditionally fought until one party yields or is killed, usually to settle a quarrel involving a point of honor. Above all else, the title warchief is granted to those who display strength and decisive action. Warchiefs must be able to gain respect via combat effectiveness and martial conquests but also have enough tact to keep the Horde united and stable.

The warchief may accept ambassadors and advisers from all the different tribes and members of the Horde to makes sure their voices are heard in the running of the fledgling hegemony but ultimately, only the warchief has the final say in matters concerning the entire Horde.

When viewed in the collection, Warchief Thrall has the following flavor text:

Hail to the Warchief! Or rain, snow, sleet, or whatever kind of precipitation the mighty shaman prefers. Obtained from winning 1,000 games as shaman in Ranked, Arena or Duels.

All 1,000 Win heroes use the same emotes as the basic hero. For a list, see Thrall#Emotes.