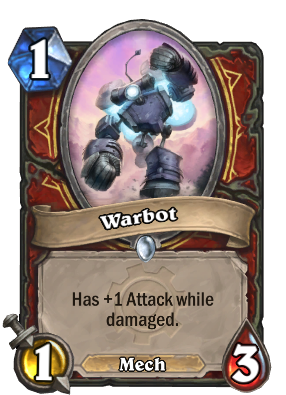 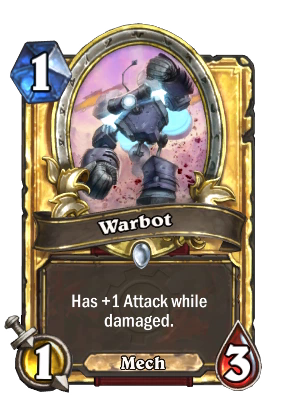 Mass production of warbots was halted when it was discovered that they were accidentally being produced at "sample size."

Warbot is a common warrior minion card, from the Goblins vs Gnomes set.

Warbot can be obtained through Goblins vs Gnomes card packs, or through crafting.

Great starting hand minion, most suited when playing against aggro decks such as Face Hunter or Zoolock. If used correctly it can trade for 2 cards, for example killing a Leper Gnome (thus activating the Warbot's Enrage effect) followed by trading the next turn with a 2-mana minion such as Knife Juggler or Mad Scientist.

Alternatively, a first-turn Warbot can be buffed on the second turn with Inner Rage or Cruel Taskmaster to let it attack for 4 damage.

Since this minion is a Mech, it provides synergy with other Mechs. Screwjank Clunker can make this a 3/5 minion which can give you a lot of tempo and favourable trades. The low cost of 1 mana also allows you to trigger the battlecry of Gorillabot A-3 quite easily.

Warbots are combative battle pets. Prior to the invention of the Pet Battle System, Warbots were already known for their aggression, with a tendency to seek out and attack other Warbots whenever they saw them. Warbots had to be fueled with either red or blue fuel, and would immediately attack any Warbot using the opposite colour fuel.