This article is using {{Card template}}.
See Help:Style guide/Card for how to edit this kind of article.
Edit this article
War Master Voone
53222 • TRLA_200h
Regular 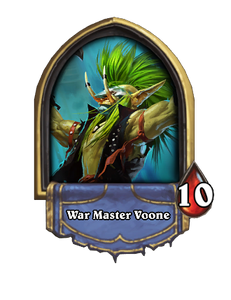 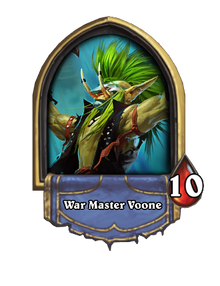 For the minion card of the same name, see War Master Voone

War Master Voone is a boss that can be encountered during the Rumble Run, if the player has not choosen one of the Warrior Shrines. 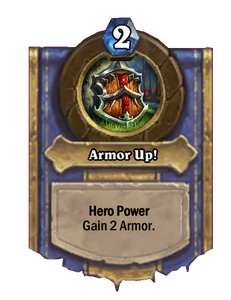 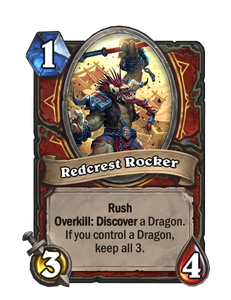 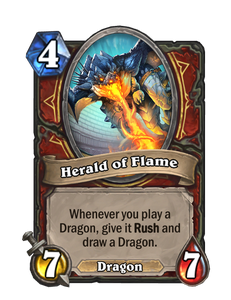 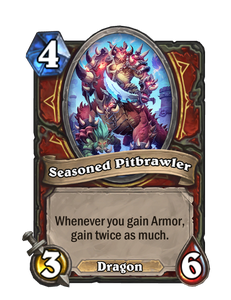 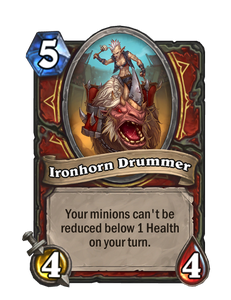 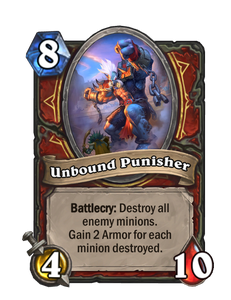 War Master Voone
I be a walking mosh pit!

War Master Voone
Greetings - I see you're a fan!
Well Played - The lil' rhinos LOVED dat one.
Thanks - I'll be here all night!
Threaten - I'll beat you like a drum.
Oops - Dat's messed up.
Wow - Autographs after the beating!
Sorry - It happens.

War Master Voone
Do your worst!
Hey, is this thing on?
That's a show stopper!

War Master Voone
I'll beat you like a drum!
Ready for the encore.
Time for the second act!

Getting 5+ armor
I am ready to ROCK!
Try to break me!
You can't break dis!
Equips a weapon
That is my jam.
This'll do it.
Time to go HAM.

Spirit of the Rhino

Pay for your trespasses!

You call that a dragon?

I don't care about the odds!

War Master Voone is a forest troll who is encountered as a boss in Lower Blackrock Spire in World of Warcraft. He is the leader of the Smolderthorn tribe and a leading member of the sinister Dark Horde.

The Dark Horde, also referred to as the "true Horde", is a renegade group of orcs, trolls, ogres, and goblins who dwell in Blackrock Spire and consist largely of the remnants of the Blackrock clan and Dragonmaw clan. They were marshaled by Nefarian and ruled by the self-styled Warchief Rend Blackhand. Unlike the orcs of Thrall's Horde, they remained steadfast to the ideals of the old Horde and embraced the demonic bloodlust.

From the World of Warcraft Adventure Guide
During the Second War, Voone led small strike teams on daring missions into the heart of high elven territory. The cunning troll joined the false Horde because he wanted to be its chief strategist, not because he believed in Blackhand's ideology. Voone sees the splinter faction as an underdog, and he enjoys the satisfaction of overcoming insurmountable odds.

In Hearthstone lore, Voone has traveled all the way from Blackrock Mountain to serve as the champion of Akali's Rhinos, the warrior team in Rastakhan's Rumble.

Voone finds kindship in the rhino loa Akali. He’s a simple troll—he loves loud drums, a roaring crowd, and a raucous after-party—but his former employment by the Black Dragonflight will give Warriors special insight into the ways of dragons.[1]

[...] everybody loves War Master Voone. Not only are Voone’s parties legendary, rumor has it that he’s got friends in high places. Blackrock Mountain is pretty high up, right?[2]

Voone is one of the easiest bosses. His deck is full of high-cost cards, and has little to play in early game. You don't need too destroy his Shrine, but make sure he can never make use of it. If Voone starts with 40 Health or less, you can aggro him and win. Above that, use your early turns to deal as much damage as possible, but make sure to have control over the board. Once he brings out his big Dragons, kill them whilst still dealing face damage. If your deck is very bad for aggro, you can try to out-tempo or control better, though it is not easy.