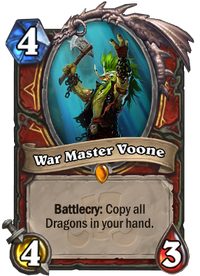 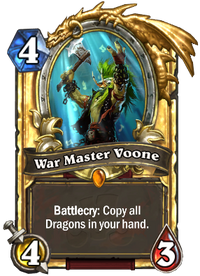 Battlecry: Copy all Dragons in your hand.
Flavor text

For the boss of the same name, see War Master Voone (boss).

War Master Voone can be obtained through Rastakhan's Rumble card packs, or through crafting.

Voone is a great source of additional Dragon value, without the requirement of actually playing the dragons from your hand.

A threatening combo, as demonstrated in the promotional video Rastakhan’s Rumble: Ticket to Greatness Part 3, is to play Voone while you have high-value dragons such as Ysera, Primordial Drake, etc. Add a copy of Voone to your hand with Zola the Gorgon, and afterwards play The Boomship next turn, resulting in 3 high-health dragons with Rush. (Playing Zola isn't necessary, and is considered a bonus in value)

One of Voone's greatest attributes is his versatility. With the number of dragons available, particularly through Dragon Roar, and different effects they can have, this card can have a strong favorable impact on a game in several different ways, from creating more taunts or armor to play defensively, more control or aggressive minions, etc. This flexibility makes Voone a serious threat.

Even more powerful in Wild.

War Master Voone is a forest troll who is encountered as a boss in Lower Blackrock Spire in World of Warcraft. He is the leader of the Smolderthorn tribe and a leading member of the sinister Dark Horde.

The Dark Horde, also referred to as the "true Horde", is a renegade group of orcs, trolls, ogres, and goblins who dwell in Blackrock Spire and consist largely of the remnants of the Blackrock clan and Dragonmaw clan. They were marshaled by Nefarian and ruled by the self-styled Warchief Rend Blackhand. Unlike the orcs of Thrall's Horde, they remained steadfast to the ideals of the old Horde and embraced the demonic bloodlust.

From the World of Warcraft Adventure Guide
During the Second War, Voone led small strike teams on daring missions into the heart of high elven territory. The cunning troll joined the false Horde because he wanted to be its chief strategist, not because he believed in Blackhand's ideology. Voone sees the splinter faction as an underdog, and he enjoys the satisfaction of overcoming insurmountable odds.

In Hearthstone lore, Voone has traveled all the way from Blackrock Mountain to serve as the champion of Akali's Rhinos, the warrior team in Rastakhan's Rumble.

Voone finds kindship in the rhino loa Akali. He’s a simple troll—he loves loud drums, a roaring crowd, and a raucous after-party—but his former employment by the Black Dragonflight will give Warriors special insight into the ways of dragons.[1]

[...] everybody loves War Master Voone. Not only are Voone’s parties legendary, rumor has it that he’s got friends in high places. Blackrock Mountain is pretty high up, right?[2]