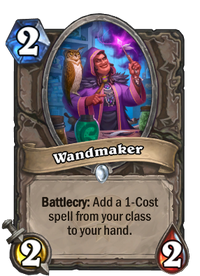 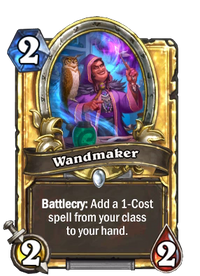 Battlecry: Add a 1-Cost spell from your class to your hand.

She creates incredibly affordable wands of all shapes and sizes. But not owls. The owl is all-natural.

Wandmaker is a common neutral minion card, from the Scholomance Academy set.

Wandmaker can be obtained through Scholomance Academy card packs, through crafting, or as an Arena reward.

A cheaper, and somewhat less powerful, version of Cobalt Spellkin. Trading the Dragon synergy and a second generated spell for a lower Mana cost, it has much of the same strengths, and general goal, as that card, namely providing cheap potential value ; for this reason, unless specifically looking for Dragon synergies, this card is arguably a stronger inclusion in decks looking for such value, like Highlander decks, since its reduced cost means it is easier to slot in a turn, and it can be played earlier.

As with Cobalt Spellkin, this minion's strength largely depends on the class playing it. Mage is a strong choice with a variety of powerful 1-cost Spells, such as Ray of Frost or Magic Trick, though other such as Shaman can also use this effectively.