Edit
watch 02:52
Roblox: DeepWoken - The Loop
Do you like this video?
Play Sound
Wandering Monster
Regular 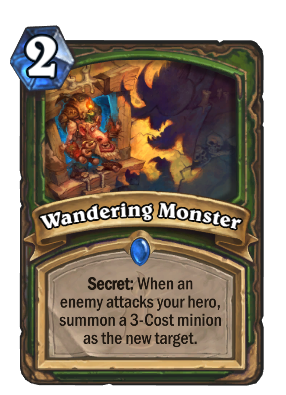 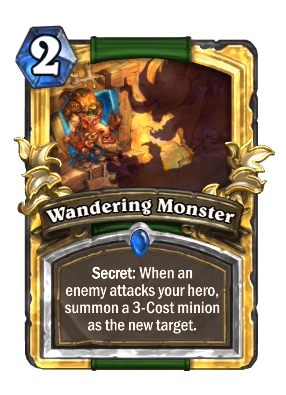 Secret: When an enemy attacks your hero, summon a 3-Cost minion as the new target.
Flavor text

Not all who wander are lost. This one is lost though, for sure.

Wandering Monster is a rare hunter spell card, from the Kobolds & Catacombs set.

Wandering Monster can be obtained by:

A decently costed Secret; this offers a 3-cost minion at a slight discount, albeit subject to RNG. As such, it should ideally be played early in the game, where your opponent's minions are unlikely to kill a 3-cost minion in a single attack. The ability to intercept attacks on your hero, much like Noble Sacrifice, allows this card to act as situational defense in a pinch.

Note that if you have a Misdirection that was played after this card, it will redirect the attack away from the summoned minion. This may not be desirable as it can direct the attack back into your hero. Similarly, Snake Trap and Venomstrike Trap will trigger when the attack is redirected.

The below table lists all collectible 3-Mana minions available in Wild format, representing the range of Wandering Monster's possible summons.