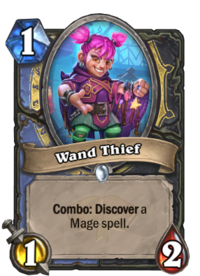 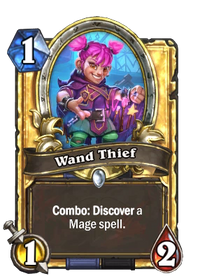 Wand Thief is a common mage/rogue minion card, from the Scholomance Academy set.

Wand Thief can be obtained through Scholomance Academy card packs, through crafting, or as an Arena reward.

Wand Thief has a decent body for its cost if the condition is fulfilled. Plenty of Mage spells deal direct damage, giving Burn decks some extra reach.

Tempo Mage and Highlander Mage can use this to search for extra spells to use with various combos. Rogue can use this card to generate a Mage spell for cards like Tess Greymane, Vendetta and Bazaar Burglary. If you end up getting Evocation, you can instantly finish the quest as early as turn 2.

While sneaking around in the halls she decided to use Rogue Combo to discover a Mage spell, now you can too!"[1]