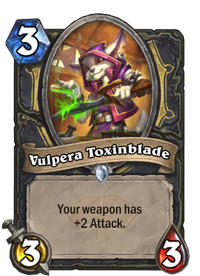 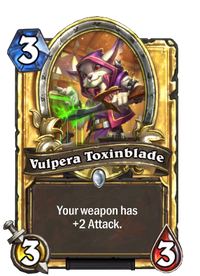 Your weapon has +2 Attack.
Flavor text

The blade works well enough on its own… but this is just in case.

Vulpera Toxinblade is a common rogue minion card, from the Scholomance Academy set.

Vulpera Toxinblade can be obtained through Scholomance Academy card packs, through crafting, or as an Arena reward.

This card is very strong in Tempo Rogue decks, effectively making the daggers created by the Rogue hero power into Fiery War Axes. At 3 mana, it is a good curve after using your hero power at Turn 2. Vulpera Toxinblade is also strong in any deck with plenty of weapons, including Self-Sharpening Sword, which can be raised to very high levels, though the attack only lasts as long as Toxinblade stays alive.