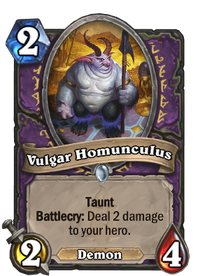 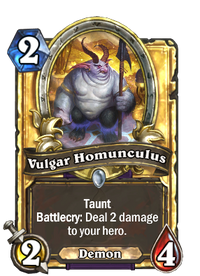 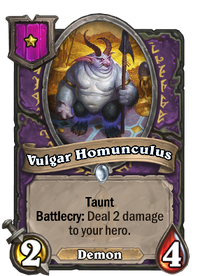 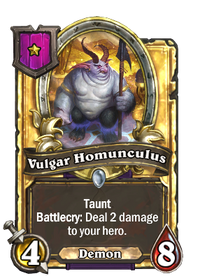 Fortunately he has an even number of fingers.

Vulgar Homunculus is a common warlock minion card, from the Kobolds and Catacombs set.

Vulgar Homunculus can be obtained through Kobolds & Catacombs card packs, or through crafting.

Vulgar Homunculus is a cheap and effective minion, boasting great stats and taunt for a trivial payment in hero health. Due to its great stats, it's a very strong choice for Zoolock to protect your other minions. It can also activate Duskbat's effect. However, as a 2-cost card, it does interfere with Prince Keleseth.

Summon
Hey, twerp. Go away!
Pee-yew. You stink!
You hit like a Wisp!
You fight like a Dryad.

Attack
Don't tell me what to do!
You hit like a Wisp!
Hah, easy!
You fight like a Dryad.

A homunculus, plural homunculi, is a type of undead construct so lifelike so as to be undetectable, even by undead-hunting experts such as Lilian Voss. Homunculi speak in coherent thoughts, and their skin is well-preserved. However, when sliced open a green liquid pours out of their bodies. The dreadlords of the Burning Legion started to use them during the Third invasion of the Burning Legion to infiltrate their enemies, in reaction to the demon hunters' ability to detect demons in disguise. Despite this recent use, they are not a recent invention: homunculi have been known to Azeroth since at least as far back as the First War. Kirin Tor doctrine frowns upon making homunculi, but some such as Khadgar understand the principles involved in creating them.

Homunculi were first introduced in World of Warcraft in the Burning Crusade expansion as a type of small, imp-like creatures found roaming the haunted tower of Karazhan.