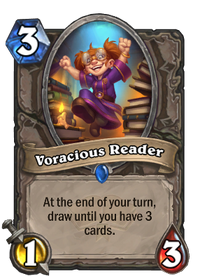 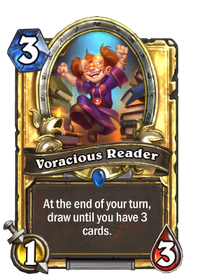 At the end of your turn, draw until you have 3 cards.
Flavor text

But how much of it is skimming?

Voracious Reader is a rare neutral minion card, from the Scholomance Academy set.

This card is a lot like Jeeves, except costing one mana less and the effect not being symmetrical. Voracious Reader is a powerful reload card in aggressive decks that run lots of cheap cards and play out most of their hand quickly, even acting as a soft taunt where the opponent has to choose between removing a card draw engine and a higher-stat minion.