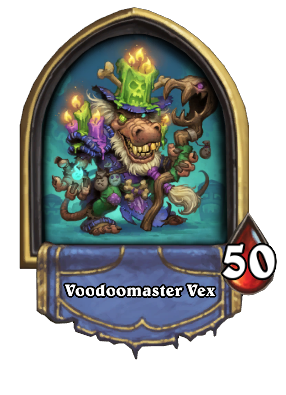 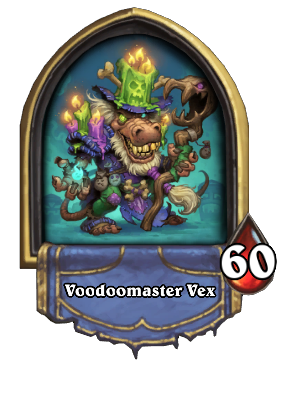 He wants to be a troll. He cries for battle and rattles for death.
External links

Voodoomaster Vex is a boss that can be encountered during the Dungeon Run.

Similar to Battle Totem and Totem of the Dead, the idea for the fight is to take advantage of his hero power. However, keep in mind that he will take advantage of the effect. Having cards that constantly trigger twice and with one another will immediately overwhelm you.

A strategy to put you above him is to take advantage of his hero power, not just with your cards by with his. Cards like Abomination and Bomb Squad will trigger twice and that is already 24 damage. As long as you don't let him overwhelm you, you can beat him.

Voodoomaster Vex
Me do voodoo, too!

Voodoomaster Vex
I hex you!

It do dead-time voodoo.
That one so rattly!

Voodoomaster Vex
I knew I do best voodoo to you!

Voodoomaster Vex is unique to hearthstone. He appears to be a witch doctor.