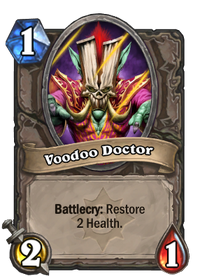 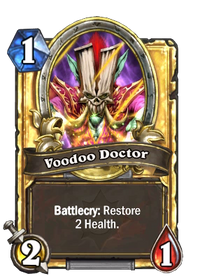 Voodoo is an oft-misunderstood art. But it is art.

Voodoo Doctor is a neutral minion, inducted into the Legacy set, formerly from the Basic set. 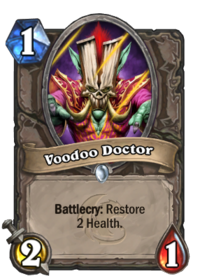 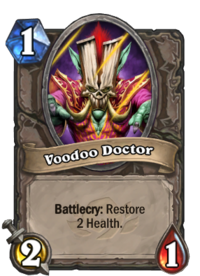 Two copies of regular and golden Voodoo Doctor are automatically given after the player completes the Ranked's New player experience system, unlocking Wild and Classic format.

Two copies of regular Voodoo Doctor (Core) are obtained for raising sum of all your class levels to 1.

Two copies of golden Voodoo Doctor (Core) are obtained for winning 500 games across all classes.

Voodoo Doctor (Core) is uncraftable and cannot be crafted or disenchanted.

This card gives you a weak aggressive minion and 2 points of healing for a single point of mana, which is good for its price; it should therefore be preferred over a Murloc Raider in any deck except a murloc deck.

This card's Battlecry can reduce its desirability in the early game, since its ability will be wasted without an injured character to heal. This can make it more useful for warlocks, who can use the healing to offset one use of Life Tap.

A priest with Auchenai Soulpriest can instead use the Voodoo Doctor as a very cost-efficient source of 2 damage.

"Stay away from da voodoo."

Voodoo is a type of magic practiced by the trolls. The Voodoo Doctor may also be related to the troll witch doctor.