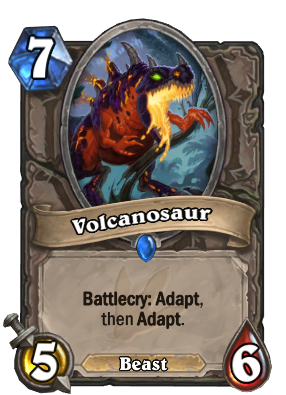 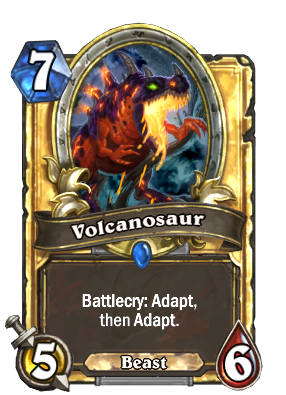 Volcanosaur is a rare neutral minion card, from the Journey to Un'Goro set.

Volcanosaur can be obtained through Journey to Un'Goro card packs, or through crafting.

While statistically poor for its mana cost, the double Adapt gives this minion an incredible amount of versatility. Depending on the board state and your luck, it could become a Taunt with Divine Shield, a Poisonous minion with Stealth, an 8/9 minion, or many more combinations. Despite this, it is still very expensive and lacks any immediate board impact, making it mostly useful for Arena rather than Constructed.

Handbuffs are probably the best options to use with him. A good +2/+2 from Farraki Battleaxe enables you to put up a 7 cost 7/8 card that can obtain Windfury and any other powerful combinations.

For a 7 cost minion, Volcanosaur is weak on his own, but his power curve is really high, so, cost reduction can be a nice choice to combine with. Prismatic Lens is the best option to play along. Reducing it's cost to 2 or 3 can potentially win the game if protected right.

Brann Bronzebeard can transform Volcanosaur in a somehow stronger Galvadon.