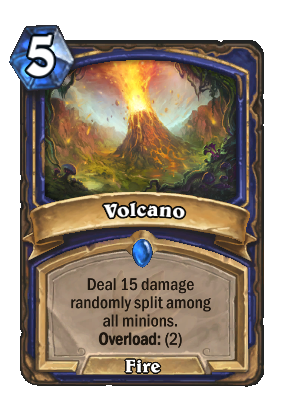 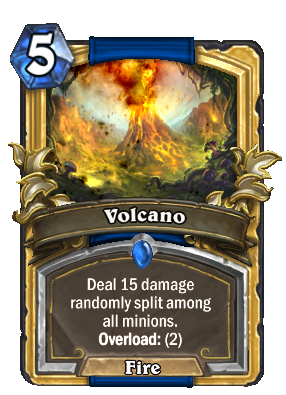 Many young shaman summon a volcano as their first school project.

Volcano is a rare shaman spell card, from the Journey to Un'Goro set.

Volcano can be obtained through Journey to Un'Goro card packs, or through crafting.

This spell shoots 15 missiles, each one dealing 1 damage to a randomly selected minion:

A great card serving as an alternative for Elemental Destruction, with more versatility and less overload penalty at a higher base cost and less total damage.

Volcano can be used much the same as Elemental Destruction as a board clear vs aggro, but also is great at killing a large enemy minion or two if your side of the board is clear. Ideally, this card will best be used in such a situation where you either have low health minions on the board or no minions to ensure that you clear the enemy side of the board. Generally, it's best to play this card when there is 15 or less health across all minions, taking out the RNG from the card. It can also be used with Acolyte of Pain to draw cards as you clear the board.

While not the ideal use, this can be used to damage or remove an enemy Taunt minion while you have the board, clearing the way for lethal damage. This obviously requires a bit of luck, but can be maximized by keeping your minions at high health.

This one of the few Shaman board clears where having a Wrath of Air Totem is actually a downside, since its 1 Spell Damage is overruled by the totem's 2 health.

This card represents a volcano located at the very heart of Un'Goro Crater.[1] As such, it is likely meant to represent Fire Plume Ridge.

Fire Plume Ridge is the volcano in the center of Un'Goro Crater. Lava flows down the sides of the mountain, where fire elementals can be found. The strongest of all fire elementals in Un'Goro, Blazerunner, lives within a cave at its peak.