This article is using {{Card template}}.
See Help:Style guide/Card for how to edit this kind of article.
Edit this article
Vol'jin
1931 • GVG_014
Regular 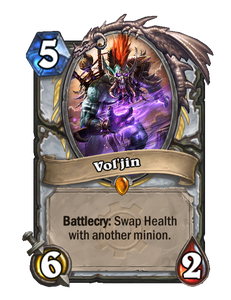 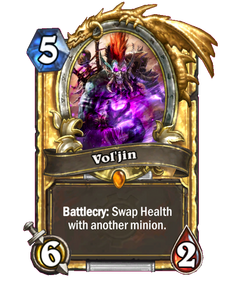 Vol'jin is a shadow hunter, which is like a shadow priest except more voodoo. 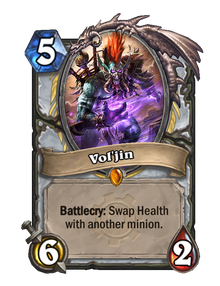 For other appearances of Vol'jin, see Vol'jin (disambiguation).

Vol'jin is a legendary priest minion card, from the Goblins vs Gnomes set.

Vol'jin's ability will most likely be used at particularly opportune moments for trading a minion into another, especially if that minion would die regardless of its Health. Vol'jin's low health being swapped for an enemy taunt - especially taunts such as Ironbark Protector, Ancient of War, or other high-Health minions. Big 4-Attack minions like Ysera, which are otherwise hard to deal with for priest, can easily be taken care of. Vol'jin also plays to the priest ability to consistently boost Health, and their many healing abilities. Vol'jin is particularly useful in Priest mirror matches, where he can steal the Health off of a highly buffed minion, while shutting them down if they were unable to draw Inner Fire.

Direct damage abilities such as Shadowform, Holy Smite, Holy Nova or Penance have great synergy with Vol'jin, allowing the Priest to steal the health from a high-health enemy minion and promptly destroy it.

Prior to Patch 2.4.0.8311, playing Vol'jin while all other minions on the board were stealthed would cause him to enter play as a 6/0 and thus instantly die.

Alternative summon (when the enemy hero is Garrosh)
Who be da Warchief now? Heh, heh, heh.

"This world don't give us nothing, <name>. It be our lot to suffer... and our duty to fight back. This Horde be our family! We don't always see eye-to-eye. We come to blows before. But when we work together - ah - there's nothing this Horde can't do."
- Vol'jin

The shadow hunter Vol'jin, son of Sen'jin, was the Warchief of the Horde, as well as Chieftain of the Darkspear tribe and rightful ruler of Durotar and the Echo Isles.

Vol'jin swore to do everything in his power to lead the Darkspear tribe just as his late father, Sen’jin, would have. For years Vol'jin resided in Orgrimmar, offering strategic advice to Thrall and assisting with critical operations such as retaking the Undercity after the Forsaken bastion had been usurped by Grand Apothecary Putress and the dreadlord Varimathras. During the Cataclysm, however, Vol'jin came into conflict with the Horde’s new warchief, Garrosh Hellscream. Alienated by the orc’s extremism and lust for war, the troll leader departed Orgrimmar and took up residence on Darkspear Isle. Despite his conflict with the new warchief, Vol'jin remained loyal to the Horde and opposed the efforts of the Zandalari to create a new troll empire in the wake of the Shattering.

By the time the war between the Alliance and Horde came to the shores of Pandaria, Vol'jin had become a bitter enemy of Garrosh. After surviving an assassination attempt by one of Hellscream's Kor'kron, Vol'jin went into hiding, while rallying support within the Horde itself to end Garrosh's reign. With Garrosh's defeat and capture, Vol'jin was led to assume the mantle of Warchief of the Horde, with the personal encouragement of Thrall and the rest of the Horde's leadership, becoming the first non-orc to earn the title. He ruled the Horde until he was mortally wounded during the battle for the Broken Shore; though he was evacuated back to Orgrimmar, he succumbed to fel poisoning from his wound. Following the guidance of the loa, with his dying breath Vol'jin named Sylvanas Windrunner, the queen of the Forsaken, as the new Warchief of the Horde.