This article is using {{Card template}}.
See Help:Style guide/Card for how to edit this kind of article.
Edit this article
Voidlord
46056 • LOOT_368
Regular 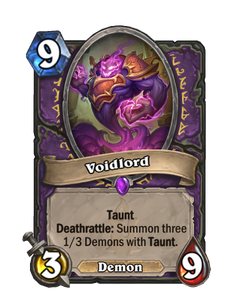 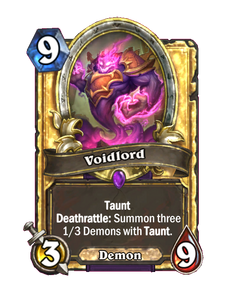 Never let it hold your checkbook. 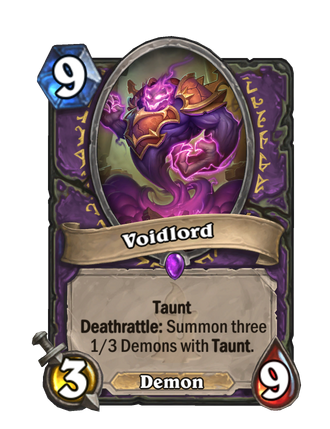 Voidlord is an epic warlock minion card, from the Kobolds and Catacombs set. 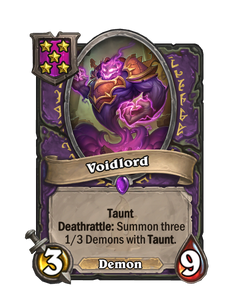 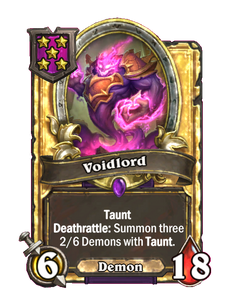 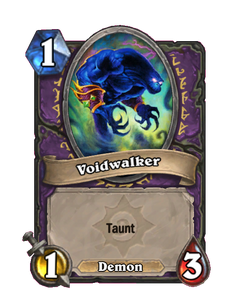 This minion is an extremely powerful defensive minion for Warlocks. At 9 Health, it's very hard to destroy without hard removal and brings out 3 more Taunt minions when it dies, which means it can absorb as much as 4 hits from the opponent, provided they don't have any AoE to remove the Voidwalkers. While very expensive, as a Demon it can be brought into the battlefield with

Possessed Lackey, and at 3 Attack, it can also be Recruited with

Master Oakheart. Additionally, it can be re-summoned with

This is quite possibly one of the most controversial warlock minions in a long time, frustrating players when one gets summoned early in the game. Use this to your advantage.

Voidlords or void lords are a powerful type of void creature. Appearing as gigantic, armor-plated voidwalkers, these fleshless void creatures employ shadow magic, and constantly feed off of magic, souls, and life. They do have souls themselves.

One of the most powerful voidlords is Dimensius the All-Devouring, who conquered K'aresh, the homeworld of the ethereals. Xal'atath, Blade of the Black Empire states that mortals have only seen "fragments, shadows; the faintest of echoes" of the void lords, and implies that Dimensius is one of these manifestations.

Voidlords are rather difficult to stumble across, but it takes very little persuading to convince one to divulge the name of a rival lord.

In World of Warcraft, warlocks could previously use the Grimoire of Supremacy talent to upgrade their normal demon minions into more powerful versions, with the Voidlord being an upgraded version of the standard Voidwalker. The Voidlord and the other upgraded warlock minions were changed into cosmetic-only minor glyphs when Grimoire of Supremacy was redesigned in the Legion expansion.