This article is using {{Card template}}.
See Help:Style guide/Card for how to edit this kind of article.
Edit this article
Void Terror
1221 • EX1_304
Regular 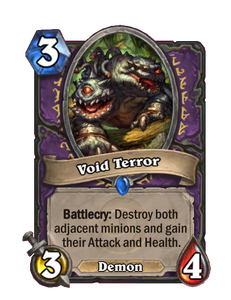 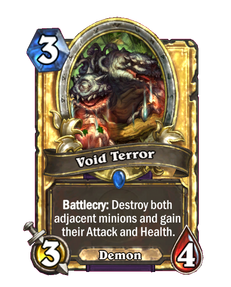 If you put this into your deck, you WILL lose the trust of your other minions. 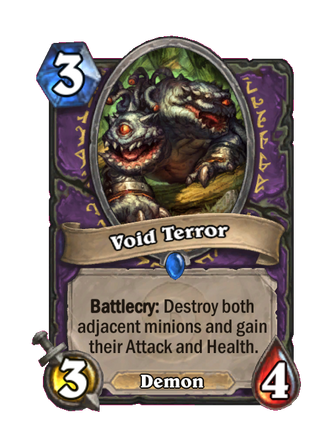 Void Terror is a rare warlock minion card, inducted into the Legacy set, formerly from the Classic set. 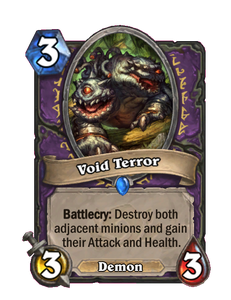 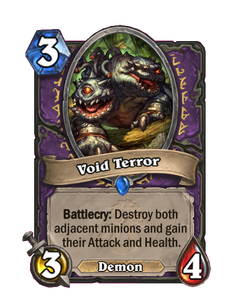 Void Terror are obtained for raising warlock to level 6.

Void Terror (Core) is uncraftable and cannot be crafted or disenchanted.

A demon minion with a very useful Battlecry, Void Terror is very useful if you are tight on health or you just simply want to kill the opponent faster.

While new players may find it hard to see the advantage in sacrificing your own minions, this minion's ability should not be underestimated, as it allows you to combine the total Attack and Health of smaller minions into one large minion, capable of profitable trades or powerful damage to your opponent. This card also effectively counters area of effect spells that rely on modest amounts of damage dealt to multiple minions, such as

Hellfire; where you might lose all of your minions to such cards, combining them into a Void Terror allows the Terror to survive and continue to do large amounts of damage. This card also combos very well with the warlock spell

The downside, of course, is that this gives your opponent a convenient single target - a simple silence or removal ability will render you worse off than having not played the card in the first place.

Ancient Watcher (since the minion couldn't attack), allowing the warlock to make use of the unusually high stats of these cards while discarding their built-in drawbacks.

With the Naxxramas cards, a very powerful combination is playing

Power Overwhelming on a

Nerubian Egg, attacking with it, and then absorbing it with a Void Terror. This will trigger the egg's Deathrattle and leave a 4/4 on the board, plus a Void Terror upwards of 7/9, potentially as early as turn 3 if you start with

A void hound (also called a void terror) is a huge and extremely powerful two-headed demon. This type of beast possesses a nearly unlimited source of demonic energy. Prior to The Burning Crusade, the only known void terror residing in Azeroth was Immol'thar, found within Dire Maul in Kalimdor. Later, Kael'Thas brought with the help of the Burning Legion a number of demons, including void terrors, to Azeroth to guard the Sunwell. A large number of them have also been sighted in Outland, guarding certain regions of the Blade's Edge Mountains and prowling the Netherstorm.