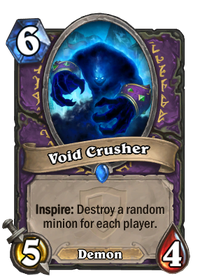 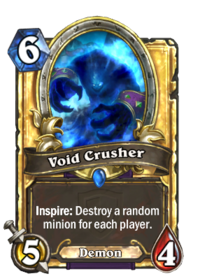 Inspire: Destroy a random minion for each player.
Flavor text

Void Crusher is a rare warlock minion card, from the Grand Tournament set.

Void Crusher can be obtained through The Grand Tournament card packs, or through crafting.

This card works well with other cards that flood your side of the board. For example, Imp-losion and Haunted Creeper can increase your odds of the effect hitting a 1/1 on your side with this effect. Void Crusher's mana cost, however, limits it to slower decks. A slower Demonlock could summon or resurrect it even for free, but such decks focus on bigger minions, making Void Crusher a poor choice.

A deck that combines small tokens with Demonlock's synergies would be a deck built around Dreadsteed. However, as of Patch 9.0.0.20457, you'll need to keep in mind to make use of Void Crusher's effect before using Dreadsteeds to trade, losing one potential attack from the destroyed Dreadsteed, lest the odds of Void Crusher destroying itself be increased.

The Void Crusher appears to be a more powerful relative of the Voidwalker. However this specific creature type appears to be unique to Hearthstone.