This article is using {{Card template}}.
See Help:Style guide/Card for how to edit this kind of article.
Edit this article
Void Contract
50004 • TRL_246
Regular 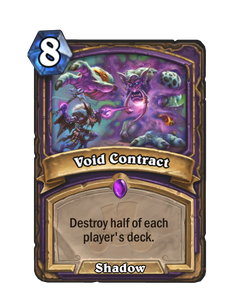 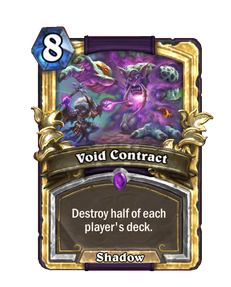 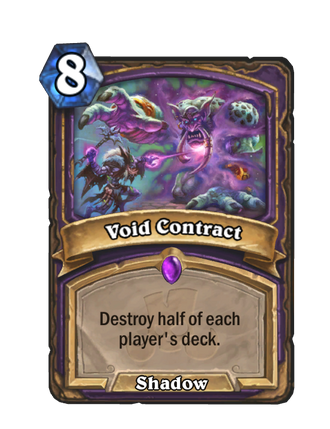 Void Contract is an epic warlock spell card, from the Rastakhan's Rumble set.

Void Contract is an extremely disruptive card against control and combo decks, wiping out half the players' decks, potentially removing their most powerful cards and even game-ending combo pieces, as well as accelerating the game by putting both players closer to fatigue. However, the cost of play this card is not only losing half your own deck, but also paying 8 mana to effectively do nothing. To balance out its heavy price which affects yourself as well as your opponent, wait until you have drawn most of the necessary cards before playing this, but not too long to where fatigue becomes an issue.

Bloodbloom to greatly decrease its mana cost, although it will result in heavy self-damage. It can also be used to speed up

Corrupted Blood more likely to be drawn for the opponent.