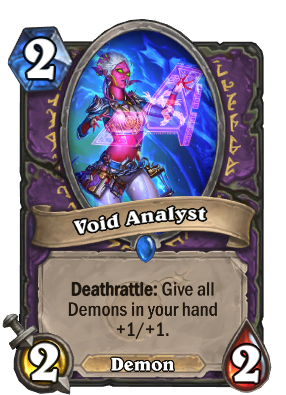 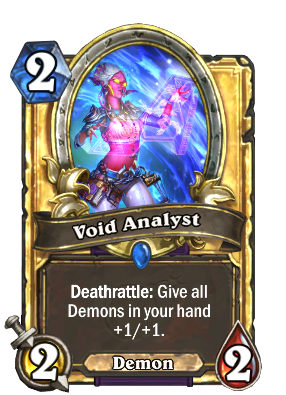 Deathrattle: Give all Demons in your hand +1/+1.
Flavor text

Void Analyst is a rare warlock minion card, from The Boomsday Project set.

Void Analyst can be obtained through The Boomsday Project card packs, or through crafting.

Void Analyst works as a replacement for Prince Keleseth for decks looking to use 2-cost cards, but is much slower and provides far, far less value. It works well with Doubling Imp, Vulgar Homunculus, Doomguard, and other valuable demons that can make fast use of the extra stats.

The eredar are a race of supremely talented magic-wielders who arose on the planet Argus countless millennia ago. Exceptionally skilled in magic, their mastery of the arcane arts were renowned throughout the scattered worlds of the Great Dark Beyond. Led by a triumvirate of wise and powerful leaders — Kil'jaeden, Archimonde and Velen — they built a vast civilization of wondrous cities and a peaceful way of life on their home world.

However, 25,000 years ago, the Dark Titan Sargeras shattered the tranquility of Argus by offering the eredar immeasurable knowledge and power. The eredar were a knowledge-seeking race, as such Kil'jaeden and Archimonde accepted Sargeras' offer. The titan bathed the eredar in his fel might, and turned them into demonic members of the Burning Legion. Velen and his followers however managed to flee Argus with the help of the divine naaru, who would rename them draenei, or "Exiled Ones".

The draenei refer to their corrupted brethren as man'ari (pronounced man-ah-ree), or "unnatural beings". The word "eredar" designates both the demonic, man'ari eredar as well as the original eredar race, of which the draenei are representative, but mostly for the former as it has developed a negative connotation. The original eredar are also referred to as the Ancient Eredar. The man'ari now act as some of the most powerful weapons in the Burning Legion's arsenal. Skilled sorcerers in both fel and shadow magics, they are often found in command of contingents of demon forces. When facing eredar of great power, large armies are useless for the most part. Their corruptive powers over mortal souls are such that only the strongest-willed can even stand face to face with them.