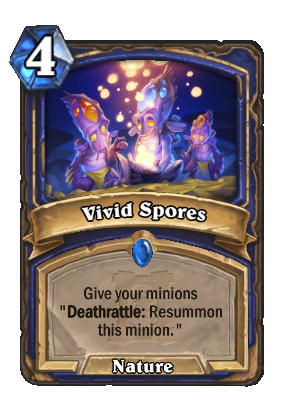 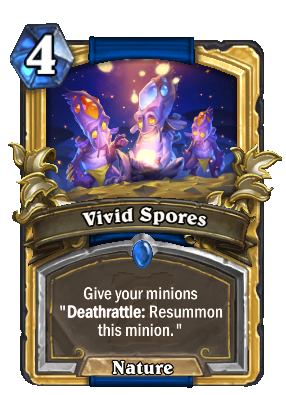 Give your minions "Deathrattle: Resummon this minion."
Flavor text

Hey man, I just feel like... death is just a construct of our imaginations, ya know?

Vivid Spores is a rare shaman spell card, from the Ashes of Outland set.

Vivid Spores performs exactly like Ancestral Spirit but on all your friendly minions for 2 mana more.

It is best played alongside many high cost minions and even better with a Deathrattle, Reborn, Charge,Rush, or Taunt

Scrapyard Colossus, Colossus of the Moon are great minions to be used on. Both of them not only produce another strong minion upon death but also resummoning itself but also have the potential to resummon them again on their second death.

Walking Fountain, if killed while trading has the ability to attack twice with Rush and heal back additional 8 health.

Be careful that silence or transforms can negate this effect such as Devolve, Mass Dispel, or Plague of Death