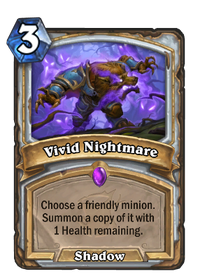 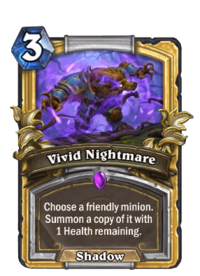 Choose a friendly minion. Summon a copy of it with 1 Health remaining.

"I… I dreamed I accidentally crafted a golden Millhouse! It was so REAL!"

Vivid Nightmare is an epic priest spell card, from the The Witchwood set.

Vivid Nightmare can be obtained through The Witchwood card packs, or through crafting.

Vivid Nightmare is a spell version of Mirage Caller, trading the extra 2/3 for the target's full attack and ability to be healed. It can also be searched by Shadow Visions and have its cost reduced by Radiant Elemental, making it easier to combo with.

Like all copy effects, Vivid Nightmare is most powerful when used on minions with active effects (Prophet Velen, Y'Shaarj, Rage Unbound) or strong Deathrattles (Cairne Bloodhoof, Sylvanas Windrunner, Obsidian Statue). Unlike with many other copy effects, the copied minion keeps its full attack value, giving this card excellent value with Charge and Rush minions. It also uniquely creates a damaged minion, giving some synergy with the Priest Hero Power, Northshire Cleric and many healing spells with multiple targets such as Circle of Healing, Binding Heal and Divine Hymn.

Fitting the theme of other Priest spells breaking the target's mind, this spell seems to represent the Priest calling forth a nightmare so real, it can affect the world around it - and if nurtured, grow into a creature indistinguishable from reality.