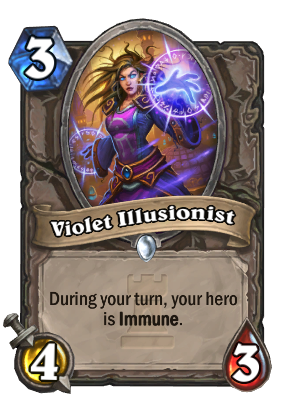 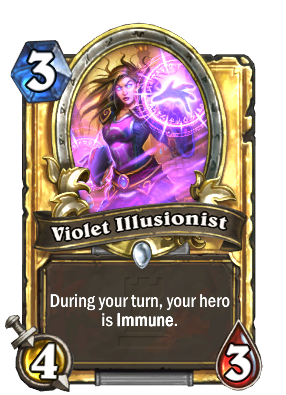 During your turn, your hero is Immune.
Flavor text

She’s much more cheerful after losing the ‘n’ in her name.

Violet Illusionist is a common neutral minion card, from the One Night in Karazhan set.

Two copies of regular Violet Illusionist are obtained by completing The Spire, the fourth and final wing of One Night in Karazhan.

As a Wild-format card, both regular and golden versions of Violet Illusionist can also be crafted for the following amounts:

Violet Illusionist has a strong synergy with weapons, allowing the user to trade with an enemy minion without taking damage. Warrior weapons designed for attacking minions such as Gorehowl and Fool's Bane work especially well with a Violet Illusionist. Doomhammer can likewise benefit due to its Windfury. It is most useful when allowing the hero to attack a high-Attack target, preventing a sizeable amount of damage. The combination is comparable to the built-in effect of Gladiator's Longbow.

This card can be used in Warlock decks to negate not only the damage from their Hero Power Life Tap, but also from self-damaging cards such as Flame Imp, Pit Lord, and Cho'Gall. It can also be used to prevent Fatigue, since Fatigue damage is dealt on the player's own turn. This is unlikely to be a game-winning strategy, although it could be useful in mill or control decks that aim for long games, especially if played when the opponent has no means left of removing it.

The Violet Illusionist's 4/3 stats are not bad for a 3 mana minion, making even a moderate advantage from its effect reasonable, although it is best played in a deck that can make good use of it before it is removed from the board.

Violet Illusionist also synergizes well in a Highlander Priest deck, particularly with the card Spawn of Shadows. The play can defeat the opponent using Spawn of Shadows' Inspire mechanic without taking any damage.

The Violet Eye is a secret sect founded by the Kirin Tor of Dalaran to spy on the Guardian of Tirisfal, Medivh, in his tower of Karazhan. Though Medivh is believed to be dead, the Violet Eye remains in Karazhan, defending against the evil that appears to have taken hold in the absence of its master.

It is unknown whether Medivh's apprentice Khadgar was a member of the Violet Eye, or whether he knew of their activities at the time (though he does seem to be aware of them now).