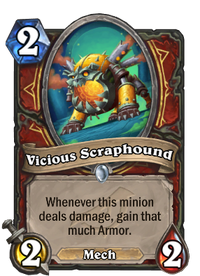 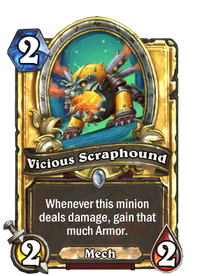 Whenever this minion deals damage, gain that much Armor.

It begs for scraps.

Vicious Scraphound is a common warrior minion card, from the Rise of Shadows set.

Vicious Scraphound can be obtained through Rise of Shadows card packs, or through crafting.

A below average minion with a scaling effect, on its own it's not as effective as Eternium Rover for Armor gain, but more powerful with buffs, especially Magnetic minions.

Particularly powerful with Zilliax, allowing it to act on the same turn and create a 5-10 health swing. With Sweeping Strikes, that number can triple to a whopping 30.

Beryllium Nullifier, notably, nearly necessitates minions to be traded into Scraphound to remove it from the board, and as a 5/10 with Elusive, this can create a 20+ Armor swing in addition to controlling the board and your opponent's next several turns if they lack a Silence.