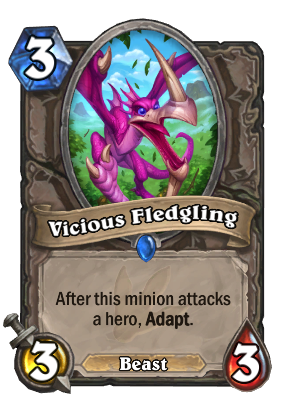 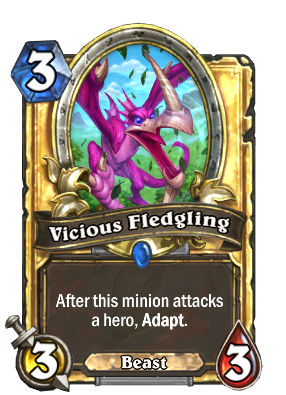 After this minion attacks a hero, Adapt.
Flavor text

A youngster who is truly hungry for self-improvement.

Vicious Fledgling is a rare neutral minion card, from the Journey to Un'Goro set.

Vicious Fledgling can be obtained through Journey to Un'Goro card packs, or through crafting.

Vicious Fledgling will no longer be offered for selection in Arena, since the 17th of October 2017. However, it is still obtainable in Arena matches through random effects.

This minion benefits greatly from attacking the enemy hero multiple times. Thus, any adaptation that increases its survivability should be prioritized. This means that Rocky Carapace, Crackling Shield and Shrouding Mist (and in some cases Liquid Membrane too) are all great choices.

The single most powerful choice, however, is Lightning Speed. If Vicious Fledgling attacks the enemy hero and gains Windfury from adaptation, it will be able to attack again immediately, and thus, adapt again as well. This makes Lightning Speed a "free" adaptation that should be picked as quickly as possible.

With its ability to grow stronger and protect itself, Vicious Fledgling is a dangerous threat that can quickly snowball out of control and must be answered immediately. If you find yourself confronted with one, do not wait to kill it, or failing that block its access to your hero by playing a taunter. If it manages to hit you even once, it may already be too late. It may grow too tough to kill or elude your grasp entirely.

The downside of this minion is its relatively weak base-stats. It can be killed by most early-game cards, meaning that preventing it from snowballing is easy. On the other hand, it has enough power to at least trade cleanly with many early- to mid-game minions, so the loss of this minion is likely not to be earth-shattering. Because the payoff can be tremendous, this card may be worth the risk, especially in decks with Beast synergies.

The Vicious Fledgling appears to be an older version of the Pterrordax Hatchling.