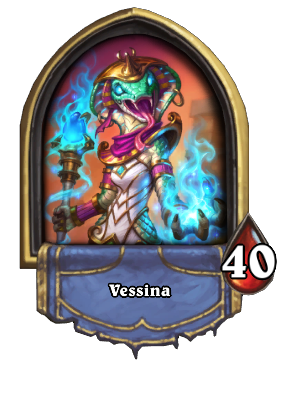 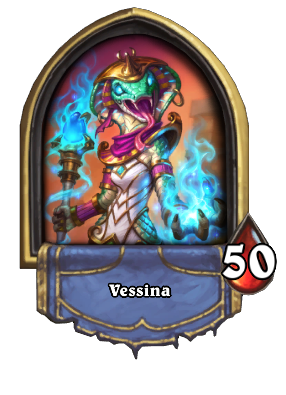 If impatience is an E.V.I.L. virtue, Vessina must be a saint.

Vessina is a boss that can be encountered initially in Chapter 4 of Tombs of Terror. After completing Chapter 4, this boss encounter will be available in any completed chapter.

These decks correspond only to level 6. If this boss is encountered on level 5, her deck will be missing 5 random cards.

Vessina
Hagatha's vengeance hasss been unleashed!
Thisss one will be easy prey... (vs. Reno Jackson)

Vessina
Elise... I see our assasssins did not succeeeed.
Elise Starseeker
It'll take a lot more than a meager assassin.

Vessina
The League of E.V.I.L. has less chatter.

Vessina
I will rest when you FALL!
Taste the power of the elementsss!
The costs are outweighed by sheer power!
The elements are shaped by my hand!
This power ssssurges!

Vessina
It began with Dalaran...
...then the plaguesss, the pharaoh's promissse...
One plague, above all otherssss... Thisss, our goal.

Passing a turn with mana Overloaded

Vessina
The elements must ressst...

Come to me, my underlings of E.V.I.L.

There are yet more plagues here to unleash!

Fall before the crumbling earth!

King Phaoris and any tol'vir allied with him

You won't reclaim this city, Tolvir!

Vessina
The others will stop you!!

Vessina - unique to Hearthstone - is one of League of E.V.I.L.'s henchmen that made debut in The Dalaran Heist adventure.

Based on the opening remark between Vessina and Elise, it's possible that Vessina had sent Terraviss to assassinate Elise during a Tavern Brawl, but it had not succeeded.