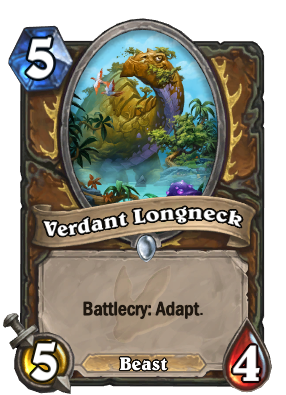 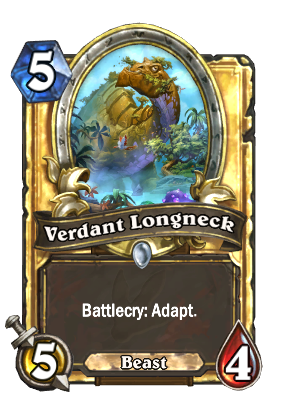 Always sticking its neck into other people’s business.

Verdant Longneck is a common druid minion card, from the Journey to Un'Goro set.

Verdant Longneck can be obtained through Journey to Un'Goro card packs, or through crafting.

Without its Battlecry, this card is identical to a Lost Tallstrider, a neutral card from Goblins vs Gnomes, and very similar to Savage Combatant, a druid card from The Grand Tournament, both costing one mana less.

Ultimately the value of this card will be determined by your luck and the versatility of its adaptations, of which you will only be able to chose from a random selection of three.

While dinosaurs aplenty have been previously known to exist all over Azeroth, sauropod-like species like this Longneck were unique to Hearthstone at the time of release. They may have later served as the inspiration for the brutosaurs introduced in World of Warcraft: Battle for Azeroth.