This article is using {{Card template}}.
See Help:Style guide/Card for how to edit this kind of article.
Edit this article
Veranus
55640 • DRG_095
Regular 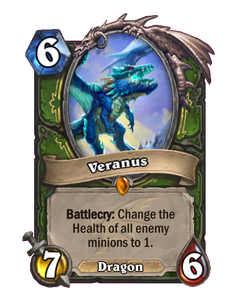 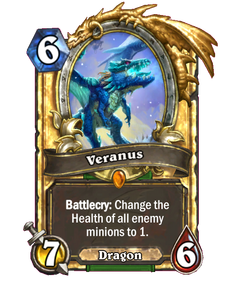 As an empty nester, she just misses her little ones. 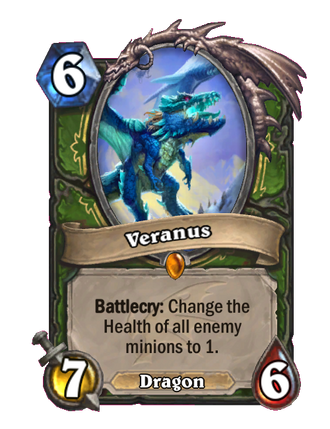 Veranus is a legendary hunter minion card, from the Descent of Dragons set.

At 6 cost, Veranus has premium aggressive stats, and offers an incredibly powerful upside; it essentially casts

Hunter's Mark on all enemy minions. Although this is a strong effect for any class, it is especially good for hunter, which has multiple ways to deal 1 damage with other cards (

Veranus doesn't always have to be played against a board full of minions. Sometimes playing Veranus against a single minion - even a small or medium sized one - and killing it is a good play. Because of Veranus' high stats, getting her out on a clear board is worthwhile.

Veranus is an elite proto-dragon located in The Storm Peaks. Veranus is the broodmother of the proto-drakes in the Storm Peaks, and was the riding drake of Thorim before he released her back into the wild. Players lure her to her nest so that Thorim can use her once again as his riding drake in his battle against Loken.

Veranus and Thorim are captured by Loken, and are brought to Ulduar where the dragon is turned into Razorscale.