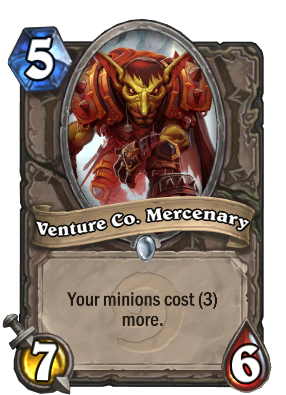 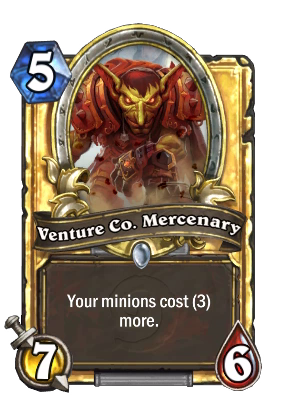 Venture Co. Mercenary is a common neutral minion card, inducted into the Legacy set, formerly from the Classic set. 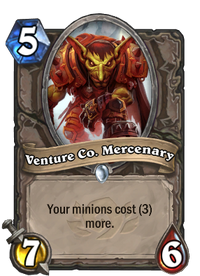 Venture Co. Mercenary can be obtained through Classic card packs, or through crafting.

With only a 5 mana cost to play, Venture Co. Mercenary is somewhat cheap for its stats which are comparable to a 6 mana minion. However, its trade-off effect will quickly outpace its low mana cost, so try to get this minion off the board as soon as possible by either trading it with your opponent's minions or using cards that remove it from play like Power Overwhelming. Alternatively, you can Silence your own minion to get rid of the effect, providing a cheap 7/6.

In World of Warcraft, the Venture Company is a powerful goblin organization, specializing in mining, forestry and trading. While ostensibly a respectable and industrious organization, in practice the Venture Co. is well-known for its shady dealings, as well its ruthlessness in removing anything and anyone that stands in the way of its never-ending pursuit of profit.