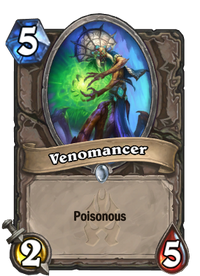 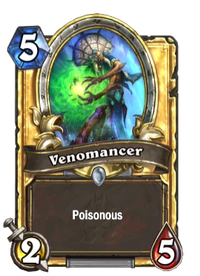 Eight times the death of regular-mancers.

Venomancer is a common neutral minion card, from the Knights of the Frozen Throne set.

Venomancer can be obtained through Knights of the Frozen Throne card packs, or through crafting.

Venomancer is too underwhelming for its effect and body for 5 mana in Constructed, with no immediate impact to the board and susceptible to silence effects. However its low attack value does not matter much when trading but while its 5 health allows it to take multiple hits. However, Trogg Gloomeater is a better alternative as a poisonous 5 drop because its Taunt ability means it can prevent a minion from ignoring it and trading favourably with other minions.

Venomancer is a reasonable card in Arena. Its fairly resilient will allow it to trade multiple small minions, while it can potentially eat up hard removal in some circumstances.

I spread the master's will.
Attack
A plague upon you!