This article is using {{Card template}}.
See Help:Style guide/Card for how to edit this kind of article.
Edit this article
Venomancer
42446 • ICC_032
Regular 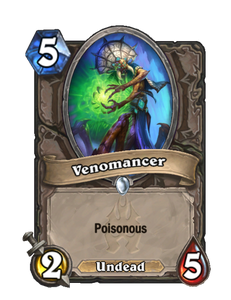 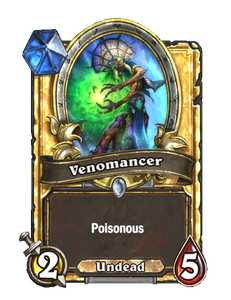 Eight times the death of regular-mancers. 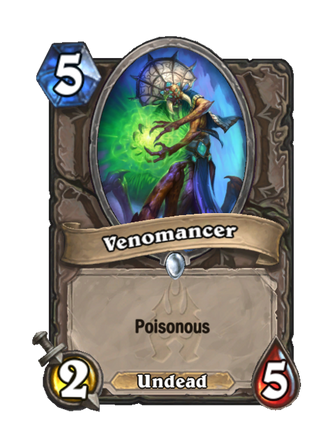 Venomancer is a common neutral minion card, from the Knights of the Frozen Throne set.

Venomancer is too underwhelming for its effect and body for 5 mana in Constructed, with no immediate impact to the board and susceptible to silence effects. However its low attack value does not matter much when trading but while its 5 health allows it to take multiple hits. However,

Trogg Gloomeater is a better alternative as a poisonous 5 drop because its Taunt ability means it can prevent a minion from ignoring it and trading favourably with other minions.

Venomancer is a reasonable card in Arena. Its fairly resilient will allow it to trade multiple small minions, while it can potentially eat up hard removal in some circumstances.