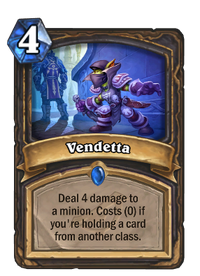 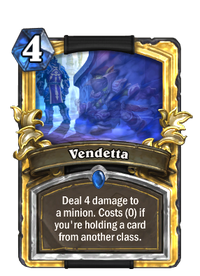 Deal 4 damage to a minion. Costs (0) if you're holding a card from another class.

A vengeful and vicarious vanguard against violent villains or vexed victims.

Vendetta is a rare rogue spell card, from the Rise of Shadows set.

Vendetta can be obtained through Rise of Shadows card packs, or through crafting.

A simple but powerful removal spell, essentially functioning as a 0-mana Shadow Bolt if you can keep its condition fulfilled. Vendetta works nicely with cards like Blink Fox, Pilfer, and Hench-Clan Burglar.

Vendetta is an Assassination rogue ability which marks a target enemy for 20 seconds, increasing the damage that the rogue deals to the target by 30% and causing them to be visible to the rogue even through stealth and invisibility effects.