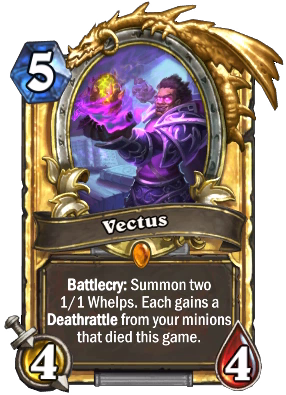 Battlecry: Summon two 1/1 Whelps. Each gains a Deathrattle from your minions that died this game.
Flavor text

Don’t let that dark magic worry you. He’ll ensure they hatch without a scratch.

Vectus is a legendary neutral minion card, from the Scholomance Academy set.

Vectus can be obtained through Scholomance Academy card packs, through crafting, or as an Arena reward. 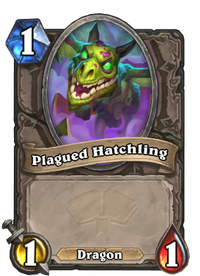 Vectus is a great minion for decks heavy in strong Deathrattles - good examples are minions like Teacher's Pet, Enhanced Dreadlord, or Plagued Protodrake. A notable use for Vectus is to copy the Deathrattles of legendaries with Prime forms in order to get another copy of the Prime shuffled into your deck. Vectus works best in a deck with only a few strong Deathrattles, to remove the risk of copying weaker effects.

One good use is to replay Arfus. Death Knight cards are very strong and useful, specially Death Coil or Death and Decay.

Each Hatchling will get a random Deathrattle from a random card. The same effect can only be carried if it was played a second time. So it is advised that Vectus should be played on a specific turn when you can take full advantage of each Deathrattle and when your wanted effects were already played.

Vectus is a level 42 elite skeletal mage mini-boss and one of the main necromancy teachers of Scholomance, the School of Necromancy. Vectus developed the plagued dragonflight found inside Scholomance, which he got by paying Tinkee Steamboil in the Burning Steppes money for eggs out of Blackrock Spire.