This article is using {{Card template}}.
See Help:Style guide/Card for how to edit this kind of article.
Edit this article
Varian Wrynn
2760 • AT_072
Regular 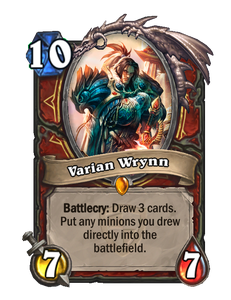 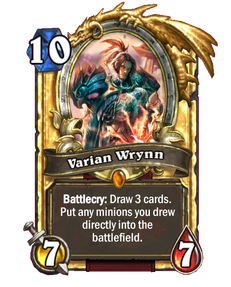 Leader of the Alliance! Father of Anduin! Also he likes to play Arena, and he averages 12 wins. 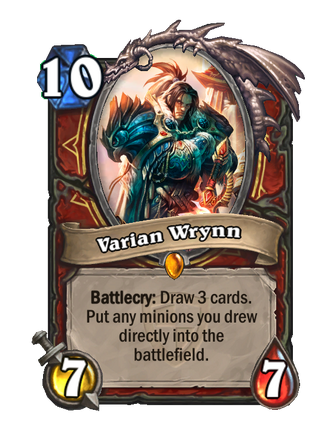 Varian Wrynn is a legendary warrior minion card, from the Grand Tournament set.

This leads to the following interactions:

This card serves as a way to gain card advantage and tempo swing (or somewhere in between) for a midrange or control deck. Depending on the deck you use this in, drawing minions can be either a good or a bad thing, depending on how reliant you are on Battlecry effects. High-cost minions with Taunt, Charge, Rush, or end-of-turn effects like

Armagedillo work best with Varian Wrynn. It's also preferable to have a higher ratio of minions than spells and weapons in your deck to maximize his Battlecry's value, since although the card draw is good, the tempo loss is significant on an understatted 10-mana minion if he doesn't draw any minions.

"The Horde has committed heinous crimes,

Vol'jin. But some among you fought against Garrosh's tyranny. For that, I'm willing to end this bloodshed. But know this: if your Horde fails to uphold honor as Garrosh did, we will end you."

Varian Wrynn was leader of the Alliance, and father of

Varian Wrynn, also known as Lo'Gosh the "Ghost Wolf", was the former King of Stormwind and High King of the Grand Alliance.

Varian’s life has been defined by tragedy and conflict. The murder of his father, King Llane, by the assassin Garona Halforcen weighs heavily on him, along with the accidental death of his wife, Tiffin, during a riot. The king has recently returned to the throne following his abduction by the Defias Brotherhood and the black dragon

Onyxia, who disguised herself as Lady Katrana Prestor. Robbed of his memories and enslaved by a Horde gladiatorial trainer in Kalimdor, Varian fought his way to freedom, earning the nickname “Lo’Gosh,” or “ghost wolf,” while in battle. With the help of his comrades, he was able to recover his true identity and finally defeat Onyxia. Under his daring leadership, the humans of Stormwind led the Alliance to victory against the Lich King in Northrend, and now seek to bolster their strategic holdings against their perennial enemy, the Horde. Known for his tenacity and fierce will, King Varian Wrynn is committed to protecting the Alliance's interests and raising his son, Anduin, to follow in his place. With the world plunged into chaos by the great Cataclysm, he has taken up military leadership of the Alliance, and vowed to forge a new destiny for Azeroth.

Leading the Alliance armies against the Burning Legion at the Broken Shore, Varian fell in battle at the gates of the Tomb of Sargeras, sacrificing himself to allow the Alliance forces to escape. Before staying behind to fight, Varian entrusted

Genn Greymane with a letter to his son Anduin, advising him that one must be willing to fight in order to preserve peace. In the aftermath of the battle, he was succeeded by Anduin as King of Stormwind and High King of the Alliance.