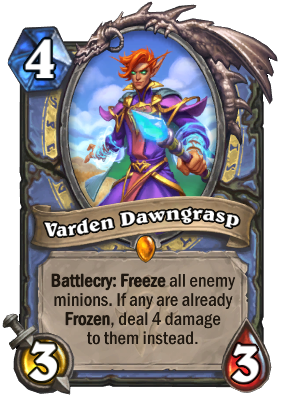 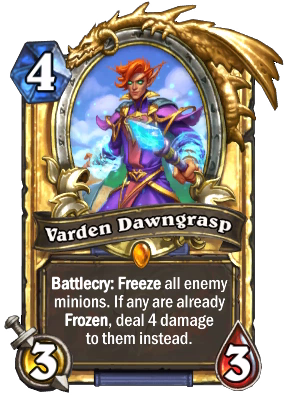 Battlecry: Freeze all enemy minions. If any are already Frozen, deal 4 damage to them instead.
Flavor text

Varden Dawngrasp could wield fire, summon hailstorms, and morph a night elf into a sheep with a snap of their fingers. Knowing how malleable reality could be, certain labels felt downright trivial.

Varden Dawngrasp is a legendary mage minion card, from the Forged in the Barrens set.

Varden Dawngrasp can be obtained through Forged in the Barrens card packs, through crafting, or as an Arena reward.

Varden Dawngrasp plays similarly to playing Frost Nova, but for 1 extra mana, providing a 3/3 body, and also acts as removal for Frozen minions. If you also happen to have Flurry (Rank 1), you could combo the two cards to freeze up to 3 enemy minions and then deal 4 damage to them using Varden. However, personally Varden has a playstyle that plays more like a stall card that also gains you some board advantage. Worth noting that Varden only hits minions, so you can't use them as a burst tool with cards like Freezing Potion or Frostbolt.

Varden is great with many different freeze type effects, like Shatter, Blizzard, and Ray of Frost, the latter of which has the same damage properties as Varden. As of the Wailing Caverns mini-set release, Varden also synergizes with Shattering Blast for a full board clear.

Varden Dawngrasp is unique to Hearthstone as one of the ten mercenaries introduced in Forged in the Barrens.

A curious intellectual seeking redemption in the eyes of their people…

Dawngrasp spent most of their life in Silvermoon, a curious young elf and student of all things magical. They showed a preternatural gift for the arcane, quickly mastering various schools of magical thought. They were trained by Prince Kael'thas Sunstrider himself, who was part of the High Council of the {wow|Kirin Tor}}. It looked like Dawngrasp would rise through the ranks of the mages of Quel’thalas and attain the title of Magister.

Alas, Arthas and the Scourge had other plans. In the aftermath of the destruction of the Sunwell, Kael’thas went to Outland, but Dawngrasp would not go. After the prince’s subsequent betrayal, many of the magisters, Grand Magister Rommath included, suspected that Dawngrasp might be in league with the traitorous prince. Alienated, Dawngrasp turned to their studies for comfort.

After the Night of Falling Stars, a troll appeared in Silvermoon. His name was Kazakus, and he sought aid in gathering the glowing shards that had rained across the Barrens. Suspicious of the troll’s intentions, Dawngrasp went to Kalimdor of their own accord, seeking knowledge about the power contained inside the shards…[2]

Amongst the four children Elise was guiding ~1m21s into the reveal trailer of Journey to Un'Goro (they salute her at the end) three resembled adult mercenaries later seen in the Forged in the Barrens set: the slingshot-wielder resembles Varden while the orc resembles Rokara and the tauren resembles Guff Runetotem. After this was highlighted on Reddit,[3] Matt London initially replied to a "kids are all grown up?" question about this on Twitter stating it was non-coincidental, implying it was intended.[4], but later the day in response to a reaction[5] stated he did not intend to confirm anything.[6]

Other depictions of a red-haired elf child in Journey to Un'Goro are in the Choose Your Path and Fire Plume's Heart spell cards, though the character in them is wearing a short full-brimmed hat like Elise the Trailblazer or Sir Finley's, not a long front-brimmed cap. 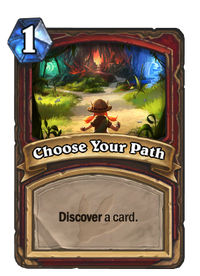 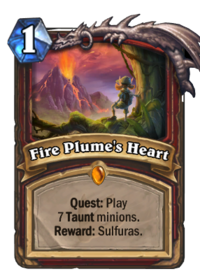