This article is using {{Card template}}.
See Help:Style guide/Card for how to edit this kind of article.
Edit this article
Vaporize
286 • EX1_594
Regular 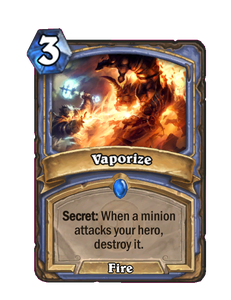 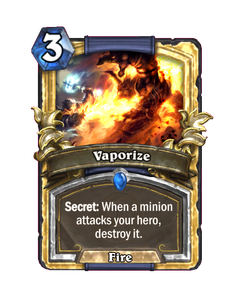 Rumor has it that Deathwing brought about the Cataclysm after losing a game to this card. We may never know the truth. 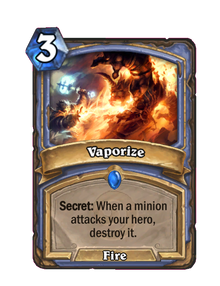 Vaporize is a rare mage spell card, inducted into the Legacy set, formerly from the Classic set. 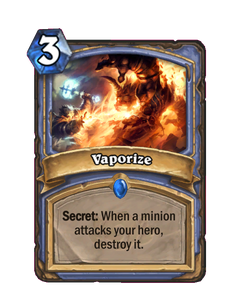 It is generally a good idea to play this card when your opponent has a massive monster bearing down on you (such as Deathwing). A good counter strategy is to send in a weak minion in first to burn the trap before you attack with your massive monster.

Surprisingly, this is not a mage ability in World of Warcraft. The only character with an ability of this name in WoW is a Bound Zephyr in the Bastion of Twilight, where it deals a respectable amount of damage and causing the afflicted player's armor to not protect them for ten seconds.