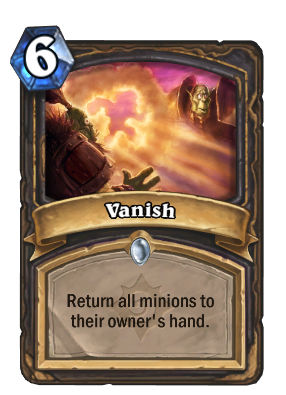 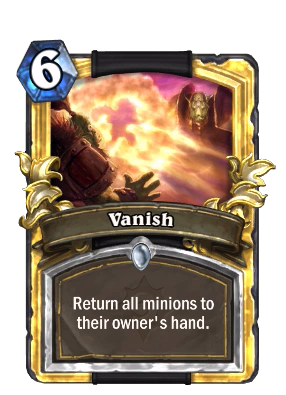 Uncollectible
Return all minions to their owner's hand.
External links

Vanish is a common rogue spell card, inducted into the Legacy set, formerly from Hall of Fame and Basic sets. 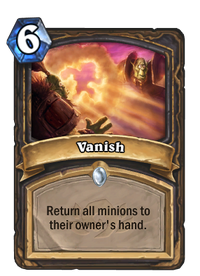 Vanish can be obtained through crafting only.

Offensive: 6 mana cost means this is a "top-deck" card, and should be used to clear taunts off the board and land a kill on the enemy with direct damage cards.

This card is generally far more useful when the opponent has far more minions on the board. Since a player may take several turns to get their minions onto the battlefield, Vanish can set players back greatly, buying time for the rogue or simply making the situation a little more even.

If the opponent has more minions on the board than they can fit back into their hand, the left over minions will be destroyed, potentially making Vanish a devastating removal option. Note that the Deathrattles of any destroyed minions will be activated. The minions should be returned in the order in which they were put into play.

Vanish can also be used to clog your opponent's hand when they have a lot of minions on the field. Drawing cards with 10 cards already in hand will cause the new cards to be destroyed, which is a powerful way to "mill" your opponent, essentially making their deck "smaller" and limiting the number of options they will have over the course of the game. Burning a powerful card such as Archmage Antonidas can almost guarantee victory against decks based around such cards. Playing a Coldlight Oracle can burn even more of their cards, while also drawing you two cards. In addition, Vanish synergizes well with cards that get a bonus for the number of cards in your hand, namely Twilight Drake and Mountain Giant, and also for a cheap Clockwork Giant after flooding your enemy's hand with cards. One effective mill combo is to play King Mukla to add two Bananas to their hand, then Vanish. The Bananas will take up extra space and cause more of their cards to be destroyed.

Vanish is a rogue ability from World of Warcraft. It causes the rogue to enter an improved stealth mode for 3 seconds, which cannot be broken by damaging effects. It can be used to allow the rogue to escape combat, or to slip back into stealth mid-fight in order to launch a fresh stealth-dependent attack from the shadows.

Vanish is also seen in the Through the Dark Portal deck of the World of Warcraft Trading Card Game.

Commentary: "While we like Rogues’ knack for getting out of sticky situations with targeted removal, Vanish allows them to effectively clear an entire board. This negates one of their intended weaknesses, reduces our ability to design towards their strengths, and makes it much harder for players to strategize against a Rogue."