Edit
watch 02:52
Roblox: DeepWoken - The Loop
Do you like this video?
Play Sound
Valeera the Hollow
Regular 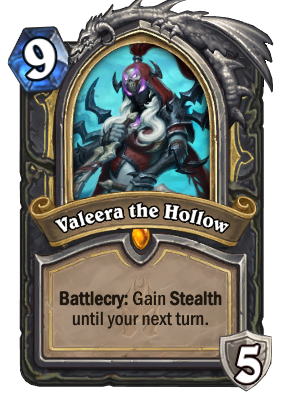 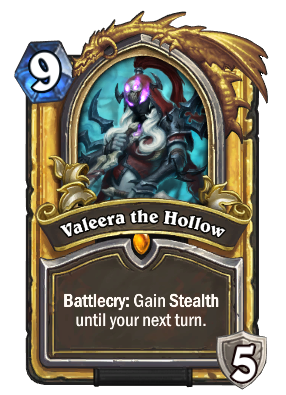 Battlecry: Gain Stealth until your next turn.
Flavor text

"Run away. Hide in your precious keeps, behind your walls and your bodyguards. Night always falls, and shadows will fill your hallowed halls. One day, one of those shadows will be me."

Valeera the Hollow is a legendary rogue hero card, from the Knights of the Frozen Throne set.

Valeera the Hollow can be obtained through Knights of the Frozen Throne card packs, or through crafting.

Like all other death knight hero cards, she is a possible reward for completing the prologue of the Icecrown singleplayer adventure. 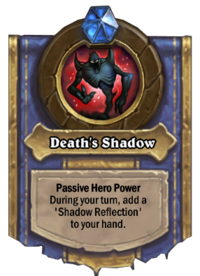 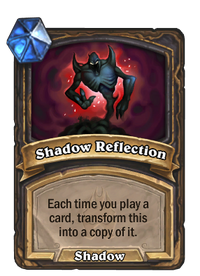 For information about the functionality of hero cards in general, see Hero card#Notes.

Valeera's hero power works well for decks that run out of cards quickly, as her Hero Power grants a copy of the last card you played, allowing you to use more of your Mana. Her hero power works especially well with five Mana cards, as it means that you use all of your Mana for maximum tempo.

This card works well with incredibly powerful but cheap cards that you are usually limited in playing. Examples include Edwin VanCleef, Pogo-Hopper, anything that summons Jade Golems, and Arcane Giant. Even without access to those cards, anything value-generating card like Hallucination and Blink Fox works very well for not running out of things to play.

It allows for an infinite supply of Shadowcasters, which allows them to create 1/1 copies of other minions to fully utilize their Battlecries. You can also re-summon a 6-mana minion every turn using Youthful Brewmaster.

Kingsbane synergizes well with this card in a Fatigue deck; once you've run out of cards, you can equip Kingsbane and then use Death's Shadow to equip it again, returning a copy to your deck and ensuring that you'll never suffer Fatigue damage.

While playing this card will protect your hero, it won't stop the opponent from building a bigger board while you're stealthed. It's a good idea to follow up with a Vanish so you can make a comeback on the board.

Don't forget to attack with your weapon before you play Valeera the Hollow or you will lose stealth.

Valeera the Hollow is the death knight version of Valeera Sanguinar.

In the web comic Freedom, a Pompous Thespian begins telling a tale of how Valeera marched to Northrend, but he is interrupted when the audience points out that Valeera was first a gladiator slave alongside Varian Wrynn, and later pledged her loyalty to Varian and his son, Anduin. Annoyed, the night elf replies that he's getting to setting up the story, and continues by stating that the Scourge had once more sullied the land and both Varian and Anduin had disappeared in the countryside, causing Valeera to fear the worst. However, Garrosh Hellscream soon appeared in Stormwind, seeking recruits for his army, and told Valeera he knew who had taken the two men whom she loved. The thespian is abruptly interrupted by the confused audience again, and he replies that Garrosh had fallen under the influence of the Lich King. The Wildhammer Fact Checker states that context is important and suggests that the night elf establish the specific year where this supposedly happened, but is dismissed again. The thespian continues his tale with Garrosh offering Valeera a pair of blades, claiming that they would enhance her abilities as well as grant her new ones. Valeera asked about the one who took Varian and Anduin, and Garrosh explained that the process of becoming a knight of the Frozen Throne could be "unpleasant", and that some handled it better than others. Garrosh related that one recently-created death knight had escaped into the wilds and began raising his own army of undead, threatening not only the Frozen Throne, but the world at large. Garrosh concluded by stating that the fates of Valeera's human friends hung in the balance, and that only he and the rogue stood between the shadow and his goal of absolute chaos.

Suddenly, Garrosh and Valeera found themselves facing the "Shadowreaper", as Garrosh called it, and its army of undead. Valeera leapt into the fray with the blades Garrosh had given her, but each attack turned her more and more into something not unlike the evil creature she faced, and she began gaining new abilities and powers with all the might of a servant of the Lich King. Garrosh and Valeera fought their way to the insane shadow at the undead army's heart, but in response, the creature sent forth its "ascendant" to transform one of the undead soldiers into a hulking monstrosity. Valeera fully embraced her darkness and gleefully slew the ascendant. However, as she prepared to attack the shadow, it told her "I know you will not harm me. You love me." The audience interrupts the story again by pointing out the anachronistic nature of the story, and that Anduin couldn't have been more than ten or twelve when this supposedly happened. The thespian replies that he never said it was Anduin, though the listeners are not convinced, and when the audience members again complain about the nonsensical timeline, the night elf dismisses them by describing it as "dramatic license". The thespian continues the tale by saying that Valeera turned on Garrosh as she realized that he had tried to make her kill the only person left in the world she cared about. Garrosh replied that Valeera had been a slave all her life, that he was the one who had taken Varian and Anduin, that Lich King sensed both the potential and the weakness within Valeera, and that her devotion to the Wrynns was just another form of slavery. Meanwhile, Anduin began casting dark magic, shouting that "soon, everyone will be saved". Garrosh urged Valeera to destroy the last person she cared about and "end this nightmare" if she truly wanted to be free. The rogue stepped forward and stabbed Anduin the chest, causing him to collapse on the ground. The thespian finishes by stating that Valeera raised her dagger, her hands shaking, conflicted by emotions. When the audience asks what happened next, the thespian remains silent and simply points to the tip jar. After receiving more gold, he concludes by stating that nothing happened, and that the point of the story was to think about Valeera's choice, and if "freedom" is all it's cracked up to be if one takes it to its logical conclusion.

"In undeath, some death knights find a special affinity for the blood and bone of the living. They carve into their enemies, sustaining themselves with deadly sanguine strikes, while using the bloody, shattered remains of the dead to fortify their own defenses. These crimson-soaked knights bend the very rules of mortality to control the frontlines of the battlefield."