This article is using {{Card template}}.
See Help:Style guide/Card for how to edit this kind of article.
Edit this article
Val'kyr Soulclaimer
42671 • ICC_408
Regular 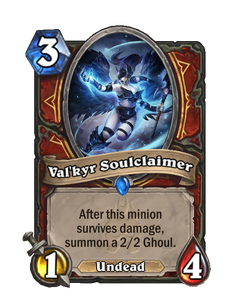 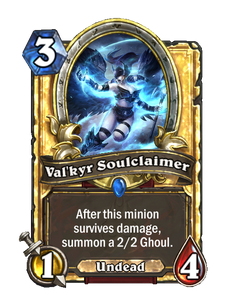 My Ghoul friend is back and you're gonna be in trouble. 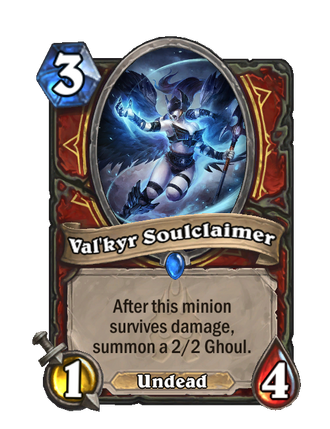 Val'kyr Soulclaimer is a rare warrior minion card, from the Knights of the Frozen Throne set. 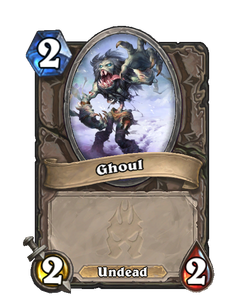 Val'kyr Soulclaimer, similar to a lot of warrior cards, has a positive effect when it takes damage. Due to the card's low attack value, it's likely that the damage dealt will often need to be self-caused, rather than by your opponent, by using cards such a

Whirlwind. It can be used alongside cards such as

Acolyte of Pain to generate a lot of value from a single use of Whirlwind or other damaging effects. Attention should be paid however to the fact that this card does not work well with subsequent uses of area of effect abilities, as they will damage the Ghoul generated the first time.

Val'kyr Soulclaimer likely won't have enough synergy present to work very well in Arena, as it's stats are far too low for costing 3 mana.

The Lich King in the spirit world during The Echo of Ymiron, a quest in the Howling Fjord.

Val'kyr are a type of ascended female vrykul. The original val'kyr are warriors of the Light who serve the Prime Designate Odyn by bringing the spirits of the glorious dead to his Halls of Valor. The val'kyr of the Scourge acted as the Lich King's agents in the spirit world and were described by Thoralius the Wise as "fearsome creatures made of pure nightmare" that "now stand watch over the realm of the elements". After the defeat of the Lich King, several val'kyr now serve the Forsaken under