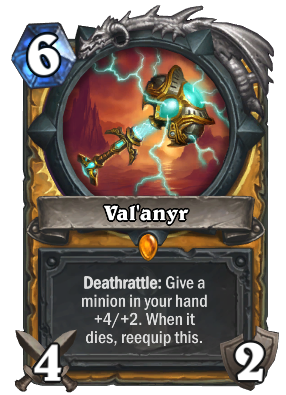 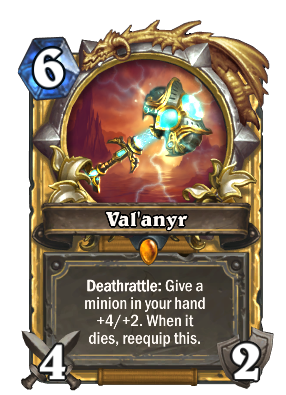 Elite
Deathrattle: Give a minion in your hand +4/+2. When it dies, reequip this.
Flavor text

Recently unearthed in one of the deepest kobold caves. Traded for a large candle.

Val'anyr is a legendary paladin weapon card, from the Kobolds and Catacombs set.

Val'anyr can be obtained through Kobolds & Catacombs card packs, or through crafting.

Val'anyr is a very strong card in a minion-based deck, giving you infinite value in buffs and weapon charges so long as you have minions in your hand. Be wary of Silence or Transform effects, as these can neutralize your weapon when it's a minion buff.

Like all in-hand buffs, Val'anyr's effect works well on Rush and Charge minions for immediate effect.

Some minions have bonuses when buffed, such as Paragon of Light and Meanstreet Marshal.

Val'anyr can also be duplicated by cards like Echoing Ooze and Doppelgangster. If Val'anyr buffs a Magnetic minion, its effect can be brought back with Kangor's Endless Army.

When you manage to get 2 Val'anyr on the same card, once the first is equiped, it will be instantly destroyed by the second one. Baron Rivendare and Spiritsinger Umbra can greatly increase this effect.

Da Undatakah can be a devastating card combined with Val'anyr. Since it can obtain the same effect, when destroyed, either it can give a minion +8/+4 or +4/+2 two times. After that, you can destroy the equiped Val'anyr to further increase any minion's power; technically giving +12/+8.

Val'anyr, Hammer of Ancient Kings is a legendary one-handed mace intended for healer characters introduced in World of Warcraft: Wrath of the Lich King.

Created by the titans themselves, Val'anyr was given to the first Earthen king, Urel Stoneheart. With it, he was to create and give life to the rest of his brethren.

Val'anyr was shattered during the first war between the earthen and the iron dwarves. The weapon's remnants were believed lost in the conflict.

In-game, Val'anyr can be created by collecting thirty Fragments of Val'anyr from the Ulduar raid and then assembling them into the Shattered Fragments of Val'anyr. The Shattered Fragments must then be taken to the Archivum Console to learn more about the artifact, after which the fragments are to be thrown into the maw of Yogg-Saron. After defeating Yogg-Saron, the Reforged Hammer of Ancient Kings can be looted from the Old God's body and taken back to the Archivum Console in return for the completed Val'anyr.