This article is using {{Card template}}.
See Help:Style guide/Card for how to edit this kind of article.
Edit this article
Unstable Ghoul
1808 • FP1_024
Regular 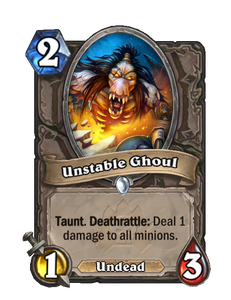 Filling your Ghouls with Rocket Fuel is all the rage at Necromancer school. 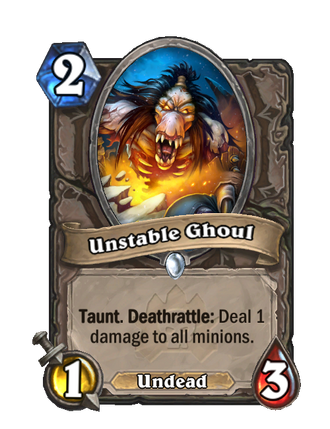 Unstable Ghoul is a common neutral minion card, from the Naxxramas set. 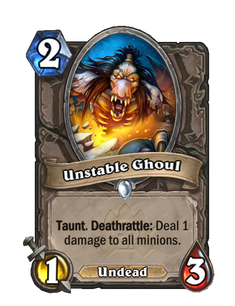 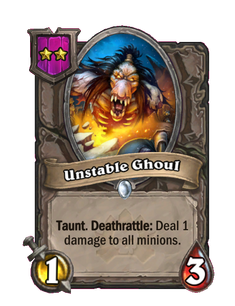 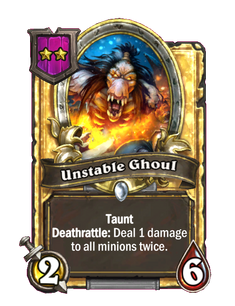 Unstable Ghoul is a very effective card against "Zoo" or "Token" decks, or in any situation where the opponent has a lot of weaker minions on the board - and the controlling player hopefully does not. Unstable Ghoul is the little brother of the

Unstable Ghoul's 1 Attack is sufficient to trade against many 1 and 2 mana minions, while its 3 Health can sometimes allow it to survive more than one attack. Its main strength however is its Deathrattle, allowing it to clear the board of weak minions or seriously weaken others. In situations where the opponent has several weak minions on the board, Unstable Ghoul can halt their momentum as well as causing them a substantial card disadvantage. For this reason, the Ghoul is usually best used near the beginning of the game, although it can still be effective later on.

With fewer or only high Health minions on the board, the Ghoul's usefulness is seriously reduced. However, its Deathrattle can still serve to add 1 to its Attack, allowing it to trade with a single 3/2. If the Ghoul were to acquire Poisonous by any means, it would clear the entire board on death.

Like the Abomination, this card is usually best used when the controlling player does not stand to have their own minions damaged by its Deathrattle. However, Enrage minions and on-damage minions like

Acolyte of Pain can combine very well with the Ghoul.

Dragon Egg can also be a useful recipient of its Deathrattle.

When playing against this card, the main concern is the number of minions damaged or lost upon its death. If timed correctly, the Ghoul can thwart a strong early game, forcing the player to sacrifice minions in order to remove it. The best counters for the Ghoul are Silences and Transformations, although it must be seriously considered whether to expend these valuable effects on such a small minion. In many cases the better option is to minimise losses and trade as efficiently as you can before then repopulating the board.