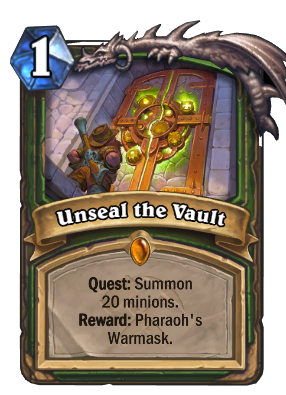 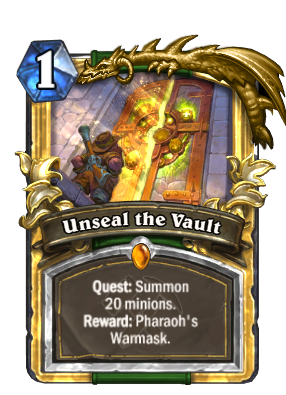 Unseal the Vault is a legendary hunter spell card, from the Saviors of Uldum set.

Unseal the Vault can be obtained through Saviors of Uldum card packs, or through crafting. 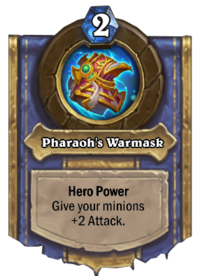 Only minions summoned on the player's side of the board counts towards the quest's progress.

Unseal the Vault is a powerful quest based around the ability to summon minions-then use them for burst damage and aggression. In spite of the relatively large chunk of the game which is to be sacrificed in favor of quest completion, Unseal the Vault offers an extremely powerful Hero power: one that gives your minions a permanent +2 attack, allowing an already aggressive class to make an extremely powerful push directly to your opponents life, a fact easily exploitable by the cheap board presence cards the class has to offer. Hunter uses a lot of cards which fit well into this deck archetype, due to the fact they simultaneously give the player board control (valuable against faster aggro decks) and summon minions (the requirement for the quest).

Two of the most valuable cards to be considered are Unleash the Hounds and Swarm of Locusts : the former's a flexible board presence card which both gives the player up to 7 damage to distribute as they see fit and completes a large chunk of the quest, the other's similar to Unleash the Hounds, but gives the player 7 minions even if the opponent's board contains only 1 minion. These cards also pair up extremely well with Knife Juggler who will apply pressure and constant damage as you finish the quest. Revenge of the Wild can also help with this, which not only doubles your tokens and Beasts' effectiveness, but also doubles the quest stacks given.

The main issue with the quest is the focus of minion-heavy deck building, which can make important minion-spell synergies harder. Mankrik and Barak Kodobane's effect come to mind. Also, similar to Deathstalker Rexxar, you lose your Reach when you finish the quest. Unlike Deathstalker Rexxar, you still can push effectively with the Hero Power, but with the wrong hand this quest can spell unintentional defeat to you if you need that *extra* bit of damage.