This article is using {{Card template}}.
See Help:Style guide/Card for how to edit this kind of article.
Edit this article
Unlicensed Apothecary
40598 • CFM_900
Regular 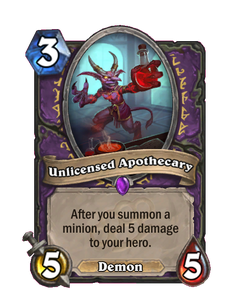 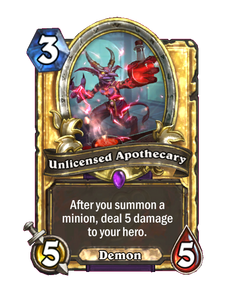 Dimensions: Full • 330 x 410px
After you summon a minion, deal 5 damage to your hero.
Flavor text

Get the ingredients wrong on ONE healing potion and they take your license. What a world! 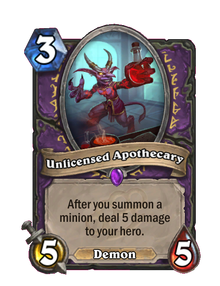 Unlicensed Apothecary is an epic warlock minion card, from the Mean Streets of Gadgetzan set.

Although this minion's drawback is severe, it's possible to avert it entirely. Due to Unlicensed Apothecary's obscene stats, playing additional minions will usually not be necessary to control the board. Slower decks like Handlock can take the most advantage out of this. Renolock can even play one or two minions while this is on the board and recover later using Reno Jackson.

While the incredible statline makes this a tempting choice for Zoolock, the downside is far more problematic in that kind of deck. Other strong 3 drops without downsides, such as Darkshire Councilman and Imp Gang Boss, are often better.

The drawback can be easily circumvented on following turns by first playing a Violet Illusionist or silencing it with Light's Champion, which will even negate the damage from playing itself.

Unlicensed Apothecary can be used in Treachery OTK decks, using either a Diseased Vulture also given away with Treachery with Curse of Rafaam to guarantee self-damage,Zul'Drak Ritualist with Brann Bronzebeard, or even Mad Summoner on an empty board to summon 6 minions for the opponent.

Should Blightborn Tamsin be played, Unlicensed Apothecary can become one of the best cards as its extreme downside can simply be used as a free 5 damage to the enemy hero by playing low cost minions or even summoning 1/1 tokens from Fiendish Circle, Rafaam's Scheme, or Implosion can deal heavy to lethal damage to the enemy hero.

Unlicensed Apothecary is an Imp who has joined the Kabal. Judging by his flavour text and trigger animation, it seems that he brews faulty healing potions to throw at your hero, causing you to take damage.