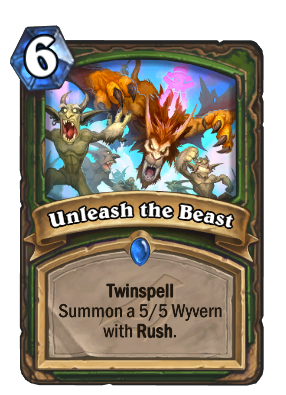 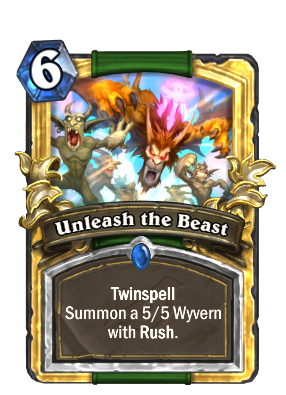 The Kirin Tor has always been lax in enforcing leash laws.

Unleash the Beast is a rare hunter spell card, from the Rise of Shadows set.

Unleash the Beast can be obtained through Rise of Shadows card packs, or through crafting. 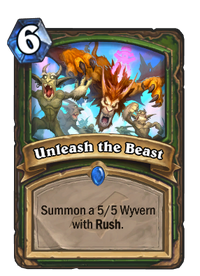 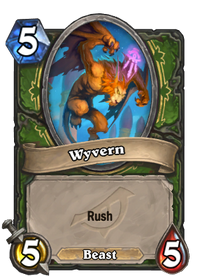 A powerful source of removal and beast-generating. Although initially overpriced, the Twinspell effect guarantees your Wyverns will find value over time. Against minion-light decks, you can use it as two 5/5 Beasts over two turns, ignoring the Rush ability. The bodies are large enough to demand an answer, especially if your opponent is already under pressure. Since the card creates a Beast, it has synergy with Tundra Rhino, Dire Frenzy, and Timber Wolf.

Unleash the Beast synergizes well with Zul'jin. In addition to summoning at least one 5/5 Rush Wyvern, the Twinspell effect will add an additional copy of the Spell to your hand for future use. A single copy of Unleash the Beast will give you two 5/5 Wyverns when Zul'jin triggers if you activate the Twinspell-created copy before summoning Zul'jin, giving you plenty of value in a single card.