This article is using {{Card template}}.
See Help:Style guide/Card for how to edit this kind of article.
Edit this article
Unite the Murlocs
41499 • UNG_942
Regular 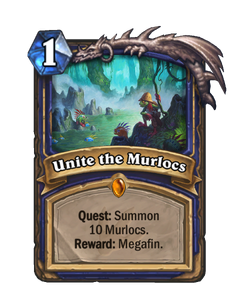 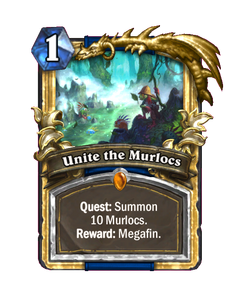 Form feet and legs! Form arms and body! Oh. Sorry. I was thinking about Mechafin. 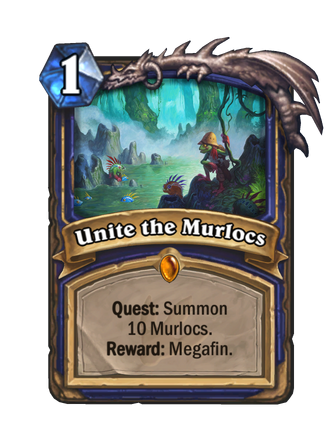 Unite the Murlocs is a legendary shaman spell card, from the Journey to Un'Goro set. 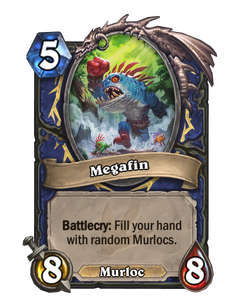 This card is an obvious fit into Murloc decks, as these will quickly finish this quest and also greatly benefit from

Megafin. Because this Quest's requirement is to summon and not play 10 murlocs, this card synergizes very well with

Call in the Finishers,

Finja, the Flying Star. Since playing the Quest costs 1 mana, it will slow down a Murloc deck a bit. However, Megafin is such a tempo swing that it shouldn't matter as long as you've stabilized.

Scargil can make for an especially effective combo with Megafin, easily allowing the player to get out the large amount of Murlocs provided by Megafin's battlecry, and providing further synergy with Everyfin is Awesome.

Megafin is easily the most simple quest reward. He simply provides more fuel for a Murloc deck, while also being a huge threat himself. Simplicity doesn't mean weakness though, as generating as much as 10 cards, many of which will have synergies with each other, is a very powerful effect. Megafin himself is obviously an incredible minion, being an 8/8 that benefits from Murloc buffs. Since he fills your hand, you shouldn't play him in a position when you have no mana, unless you don't care about overdrawing a card. This is less of an issue in Wild, where

Murloc Tinyfin has a chance of appearing.

The problem with this quest is its steep completion requirement. If you do not draw any of the four token-generating cards mentioned above, you will need to draw and play ten individual Murlocs, which will roughly take eight turns (seven if you go second). Uniting the Murlocs means relying on your token-generators. Otherwise, you will not succeed in a timely fashion.

This Quest appears to depict

Sir Finley Mrrgglton working to unite the various murlocs tribes of Un'Goro, resulting in the appearance of Megafin.