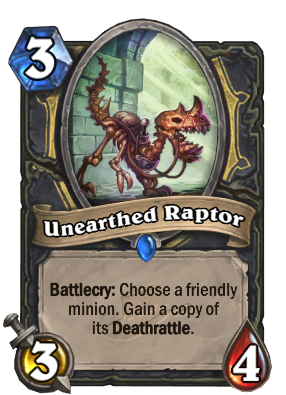 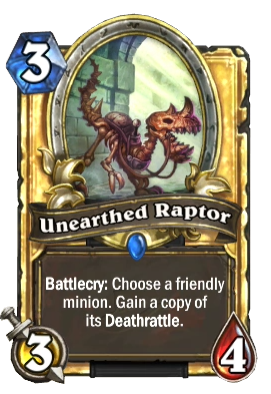 Battlecry: Choose a friendly minion. Gain a copy of its Deathrattle.
Flavor text

Still hunting for the ones who earthed him.

Unearthed Raptor is a rare rogue minion card, from the League of Explorers set.

Two copies of regular Unearthed Raptor are obtained by defeating the Mine Cart Rush encounter, the second stage in The League of Explorers's second wing, Uldaman.

As a Wild-format card, both regular and golden versions of Unearthed Raptor can also be crafted for the following amounts:

Because Unearthed Raptor has 3 attack, it can easily trigger Deathrattles from 0 attack minions like Nerubian Eggs.

Its effect can be synergized well with Jade Swarmer to summon another Jade Golem allowing you to have an extra +1/+1.

Even with its solid body for 3 mana, it can be a threat should it remain on the board.

Skeletal raptors are undead raptors mainly found at Whelgar's Excavation Site in the Wetlands and the Za'Tual boneyard on the Isle of Thunder. The Unearthed Raptor bears a particular resemblance to the Fossilized Raptor, a skeletal raptor mount obtainable as a rare artifact from the Archaeology profession.