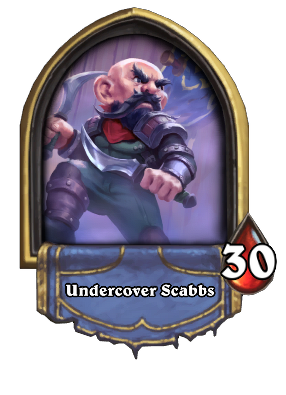 Undercover Scabbs is an alternate hero for the

This is one of Scabbs' appearances during the United in Stormwind event.

Undercover Scabbs is obtained by purchasing the Tavern Pass and reaching level 100 in the United in Stormwind's Rewards Track.

Once unlocked and selected for use, Undercover Scabbs replaces Valeera Sanguinar whenever the player uses a Rogue deck, as well as:

When viewed in the Collection, Undercover Scabbs has the following flavor text:

Scabbs Cutterbutter is an agile fighter and master of stealth. It makes him a high draft pick in Capture the Flag.
Earnable after purchasing the Tavern Pass.

Most of Undercover Scabbs's sounds are the same as Chef Scabbs. Unique, different ones are noted as Unique in References section.