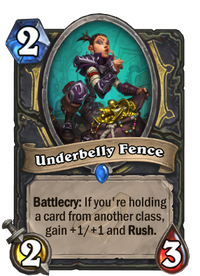 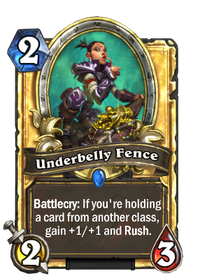 Battlecry: If you're holding a card from another class, gain +1/+1 and Rush.

She'll take anything you have—except scruples and a good work ethic.

Underbelly Fence is a rare rogue minion card, from the Rise of Shadows set.

Underbelly Fence can be obtained through Rise of Shadows card packs, or through crafting.

An incredibly powerful inclusion for Thief Rogue. Underbelly Fence is the perfect way to recover tempo after playing a burgle card, and works alongside Vendetta to control the board.

Pilfer can be used to activate this effect on turn 2; Hallucination and Swashburglar can as well in Wild.

The Underbelly is the name of the Dalaran sewer system which has its own separate map. Many races, but mostly goblins, dwell in these sewers and they could be viewed as the slum of Dalaran. The central area of the sewers is the Circle of Wills, a large hall in which the arena vendors, some dueling circles, and a small, currently unused cluster of buildings stand. Southwest of here is a section called Cantrips & Crows which contains the inn, the tavern, and the bottom exit pipe of Dalaran. The northeastern corner goes unnamed, and has a few vendors but not much else notable. Finally, further northeast, there is a small chamber in which the rogues of Dalaran operate the Black Market where reagents and rogue supplies can be found, as well as the vicious sewer shark Segacedi.

In Legion, the Underbelly Guard patrols the area, led by the corrupt Guard Captain Raethan.

The Underbelly has been transformed into the Hall of Shadows of the Uncrowned during the Burning Legion's third invasion of Azeroth. The transformation halved the accessible areas and removed access to the inn, bank and tunnel out of Dalaran.